Whistler Blackcomb is an internationally popular ski resort in British Columbia. The attraction is located about a two-hour drive north of Vancouver. I’m not a skier, but I find a visit to the resort and its surroundings enjoyable at any time of the year. It’s a lovely area that offers many interesting activities.

Some Terminology Related to Locations

The names of some of the sites in the Whistler Blackcomb area are a bit confusing, though that doesn’t interfere with the enjoyment of a visit. Here’s a brief overview of the terminology that’s used.

In order to reach the gondola, visitors must first travel up the mountain in the Whistler Village Gondola or the Blackcomb Gondola. This journey is included in the ticket price (as is the journey in the reverse direction). The trip up the mountain takes about twenty-five minutes and the journey between the mountains about eleven minutes. Anyone planning to take the gondola ride should investigate the closure times and the way to buy tickets to avoid disappointment. The latest information is available at the Whistler website.

When a traveller reaches a lodge on either mountain, they can stop for a meal or for a ski or a hike, depending on the time of year. Of course, anyone going for an alpine hike needs to take the correct supplies with them and watch the time carefully. Though Whistler is famous as a ski resort, it offers enjoyable activities in summer, too. These include hiking and mountain biking.

Whistler village contains many restaurants as well as specialty shops, a grocery store, a pharmacy, art galleries, coffee shops, spas, yoga studios, and gyms. The paths through the village are winding and branch into other paths. The route can be confusing for a first-time visitor, but the village is a fun and picturesque place to get lost in. Helpful village hosts are often available along the route. They happily answer questions and provide directions, as I’ve discovered.

To confuse matters, there’s another “village” to remember. The resort at the base of Blackcomb Mountain is now referred to as the Upper Village. It takes around ten minutes to walk there from Whistler Village. The tourist area of the Upper Village is not as big as in the other villages, but it has its own grocery store, eateries, and specialty stores. It’s located next to some luxury hotels. There are many other places to stay at Whistler.

The Welcome Figure at Whistler Village

Whistler Village and the Upper Village have a pathway known as the Cultural Connector. Following this pathway enables walkers to visit six cultural institutions. Maps of the pathway are available at the village host booths, at the institutions that are visited, and at the visitor’s centre located at the entrance to the village by the bus stop. (Buses travel between Vancouver and Whistler.)

One of the most interesting institutions for visitors to explore is probably the Squamish Lil’wat Cultural Centre, which describes and exhibits the culture of the First Nations people living in the area. It’s located in the Upper Village. The First Nations are the indigenous people of British Columbia. Two other places that visitors might find interesting are the Audain Art Museum (which is said to be located a seven-minute-walk away from the Upper Village) and the Whistler Museum (which is located in Whistler Village).

The Welcome Figure in the photo above was created by artists at the Squamish Lil’wat Cultural Centre and erected in an area known as the Village Common. The figure not only welcomes everyone to the village but also reminds us of the First Nations connection to the area. 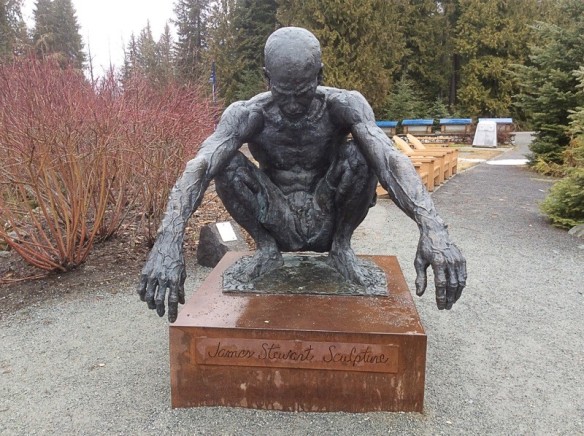 Jeri: A sculpture by James Stewart at Whistler

I enjoy looking at public art. I photographed the statue above in late winter. The trail to the Upper Village is located in the background of the photo and is part of the Cultural Connector. James Stewart (the sculptor) lives in Whistler. His sculpture is made of bronze and is named Jeri. It depicts a Capoeira dancer who is temporarily resting. Capoeira is an Afro-Brazilian form of martial art that includes elements of acrobatics and dance.

I photographed the sculpture a year ago. It was supposed to be a temporary installation. I don’t know if it’s still on display or in the location where I saw it. Other public art works can be seen in the area, however, even if Jeri is no longer there. 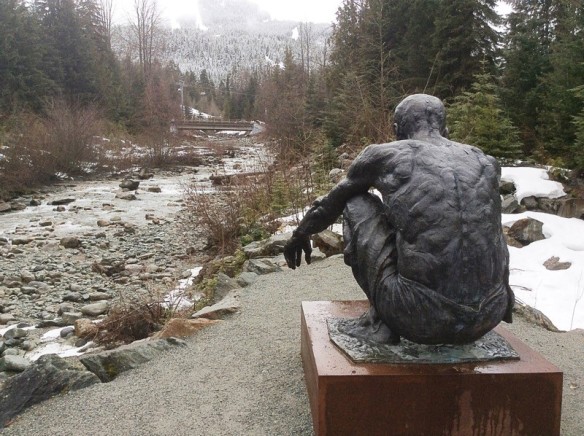 Though the villages in Whistler are interesting, there is far more to see in the area. The walking and hiking trails allow people to observe nature and lovely scenery as well as the neighbourhoods in the municipality.

The only trail that I’ve explored (apart from the pathway to the Upper Village) is the popular Valley Trail. It’s flat and gives a great overview of the Whistler area. It’s 40 km long in total and is open to pedestrians, cyclists, and dogs on leashes. The trail enables visitors to explore lakes, parks, and residential areas. The Whistler website gives ideas for routes that allow travellers to loop back if they don’t want to travel over the whole trail or take exactly the same route back.

The Valley Trail is open all year. Snowshoes or bicycles with fat tires are useful in winter. My goal is to eventually explore the whole trail and to explore some of the other trails in the area. Walking through the villages is nice, but there’s far more that I want to see at Whistler Blackcomb.