Hairy cat’s ear near my home

The hairy cat’s ear (Hypochaeris radicata) can be a very annoying plant when it grows on lawns. It’s a nuisance that I’m almost constantly fighting, but I can’t help admiring the plant. It’s amazingly vigorous. Its leaves lie close to the ground, but its flower stems extend far above the leaves and grow rapidly. The hairy cat’s ear is classified as an invasive plant in British Columbia. I can certainly understand why, but the plant holds some attractions for me.

The species belongs to the sunflower family, or the Asteraceae. It’s a herbaceous perennial. The bright yellow flowers and fluffy white fruits resemble those of dandelions but have some notable differences. The flower stem is forked, unlike the case in dandelions. In addition, the hairy cat’s ear flower stem is solid while the dandelion’s is hollow.  Both produce a milky latex. The plant’s leaves are somewhat like those of dandelions but are less deeply toothed. They have a hairy surface.

The plant got its name from the supposed resemblance of the hairy leaf to a cat’s ear. The leaves form a flattened rosette at the base of the plant. If a person runs their fingers lightly over the surface of a leaf, they will feel the hairs that cover it. If they get close enough, they will see the hairs.

The close-up photo below shows the hairy nature of the leaves. The flower stems in the photo are cut because the plant is growing on my front lawn. The next step in the plant’s removal is to dig up the root. The hairy cat’s ear has a taproot (a thick and tapering root that grows downwards in the soil). It’s important to remove the root in order to reduce the chance of the plant’s reappearance.  Frustratingly, seeds may cause hairy cat’s ear to appear in a garden after the roots of other plants in the species have been removed.

An older name for the family Asteraceae is Compositae. Both names are used today. The flower of the species in the family is really an inflorescence because it’s made of many small flowers, or florets as they are called biologically. In many members of the family, the florets are of two types—compact disk florets in the center and strap-like ray florets outside them. Hairy cats ear (and dandelions) have only ray florets. The flowers are pollinated by insects.

The fruit of the hairy cat’s ear plant is an achene and is brown in color. An achene is a dry fruit that bears only one seed, which almost fills the space inside the fruit. The achene is indehiscent, which means that it doesn’t open up when it’s mature. (The seed manages to break out of the achene during germination, though.) The hairy cat’s ear achene bears a white pappus (a cluster of hair-like structures) at its tip. The pappus catches air currents, which help to distribute the tiny fruit and its seed to a new area. 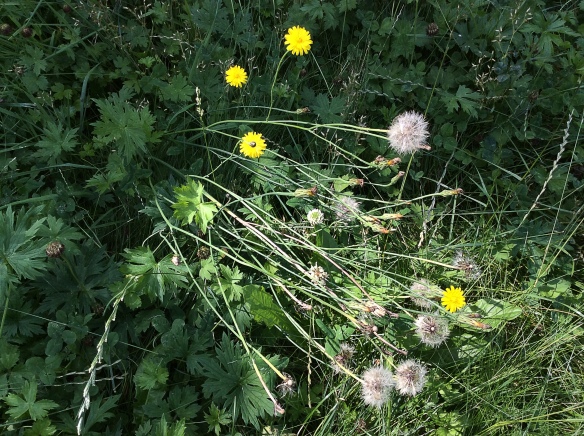 Flowers and fruits of the plant

Hairy cat’s ear loves growing on lawns. I also see it on grassy areas or bare patches of soil or on disturbed land beside or near roads. It grows in meadows and pastures and on riverbanks. In British Columbia, it’s even found on beaches. It’s a versatile plant. The flowers close in dim light, which can disguise how many are present on a patch of land. When it’s bright enough, the flowers open and display their true abundance, which can be surprising.

Hairy cat’s ears are often said to be native to Europe, but some researchers suspect that they more likely originated in North Africa. They have spread widely and now grow in most parts of the world.

If a person is interesting in foraging for food in the wild, it’s important that they can distinguish dandelions from hairy cat’s ears and similar plants. Dandelion leaves are edible. If the leaves are collected to eat, there must be no doubt about the plant’s identity. In addition, the plant should be growing in an area that is free of pesticides and pollutants. The roots of dandelions are sometimes roasted and used as a coffee substitute.

Personally, I wouldn’t eat any part of a hairy cat’s ear because the reports about the plant’s safety are conflicting. Various sources say that the leaves and roots are edible and then contradict themselves by saying that the plant is mildly poisonous and that it can cause stringhalt (an alteration in gait) in horses. It seems that scientists need to do more research to clarify the situation.

Though I admire their tenacity, I will continue to remove the plants when they invade my lawn. I enjoy observing the ones that grow in the wild, however. The sunny appearance of the flowers is pleasant. The vigorous growth of hairy cat’s ear can be annoying, but it’s a nice reminder of the energy of nature.