Bill Reid (1920-1998) was a popular and respected British Columbian sculptor and goldsmith. His mother was a member of the Haida Nation and his father was American. Bill didn’t begin exploring his Haida roots until he was an adult. His discoveries influenced much of his work.

“Chief of the Undersea World” is a sculpture of a killer whale designed by Bill Reid and placed outside the Vancouver Aquarium in Stanley Park. The facility contained killer whales when the sculpture was placed in position. Skana—a whale that once lived at the aquarium——had the same name as the mythical being represented by the sculpture. The keeping of whales in captivity has been a contentious issue in Vancouver but appears to be more-or-less resolved

Chief of the Undersea World; photo by Linda Crampton

Chief of the Undersea World

Bill Reid’s whale sculpture is 5.5 metres high and is made of bronze. Though Bill designed the whale and created a small boxwood model of it, other people were involved in creating the actual sculpture. Unfortunately, by the time of its creation, Bill had been diagnosed with Parkinson’s disease and needed some help.

The sculpture was created in 1983 and unveiled in front of the aquarium on June 2nd, 1984. It was donated by Jim and Isabel Graham, who were the official owners of the sculpture at that time. The whale stands in a reflecting pool of water. The plaque beneath it contains the following inscription.

Skana – The Killer Whale known by the Haida to be chief of the world below the sea who from his great house raised the storms of the winter and brought calm to the seas of summer. He governed the mystical cycle of the salmon and was keeper of all the oceans (sic) living treasure. 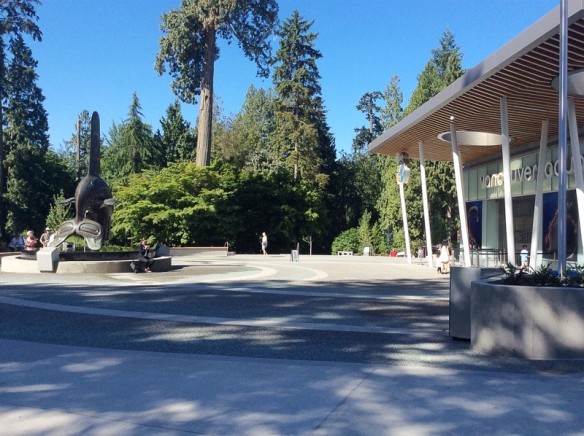 The sculpture’s location outside the aquarium; photo by Linda Crampton

History of Killer Whales at the Vancouver Aquarium

Killer whales have the scientific name Orcinus orca and are sometimes known as orcas. The history of orcas at the Vancouver Aquarium is sad, but the story has become happier over time. The aquarium no longer keeps whales in captivity. In addition, it’s very likely that a law will soon pass prohibiting the keeping of any cetaceans (whales, dolphins, and porpoises) in captivity in Canada.

Moby Doll was the first orca exhibited by the Vancouver Aquarium and the first one anywhere that was displayed to the public while in captivity. He was shown in a pen at Jericho Beach in Vancouver in 1964 and died in the same year 86 days later.

Skana and Hyak were the next orcas to arrive at the aquarium. They lived in the main facility in Stanley Park. Skana was captured in the wild in 1967 and was thought to be around six years old at the time. She died in 1980 from an infection but was still remembered by the public when Bill Reid created his sculpture. Hyak joined Skana in 1968 and died in 1991.

A female named Bjossa and a male named Finna were the last orcas to arrive at the aquarium. They were captured in 1980 and reached the facility shortly after Skana’s death. They produced calves, which didn’t live for long. Finna died in 1997. In 2000, the aquarium announced that it would no longer keep killer whales in captivity (though it still had beluga whales) and Bjossa was sent to SeaWorld San Diego in the United States. She died from a respiratory illness in 2001.

In January, 2018, the aquarium voluntarily announced that they would no longer keep cetaceans in captivity. There are two exceptions to this rule. One is Helen, a Pacific white-sided dolphin with flippers that were partially amputated in an unknown event before she arrived at the aquarium. The injuries can be seen in the photo below.  Helen has been deemed unreleasable by Fisheries and Oceans Canada. Her situation is difficult. She should have companions, but she isn’t young and the journey to another facility could be dangerous.

The other exception is cetaceans that are rescued. The Marine Mammal Rescue Centre is part of the aquarium but is located outside of Stanley Park. The centre cares for stranded marine mammals and then releases them into the wild. The problem is what to do with any rescued animals that are deemed unreleasable once they recover as much as possible from their injuries. They might be kept off-exhibit, but they may need to be transferred to a facility in another country if the law described below passes. Sea pens are sometimes suggested as intermediate habitats between life in a tank and life in the wild and might be acceptable under the new legislation.

In October, 2018, a bill prohibiting the keeping of cetaceans in captivity was passed by the Canadian Senate. The bill has to be passed by the House of Commons in order to become law, but this is expected to happen. The legislation will apply not only to the Vancouver Aquarium, which has voluntarily passed its own “law”.  Marineland in Niagara Falls, Ontario, houses captive cetaceans and appears to be the main target of the new legislation. It’s possible that the law will allow for gradual changes in aquariums instead of immediate and complete changes, which could be helpful for Helen.

This is a photograph of Helen, a Pacific white-sided dolphin. I took the photo while she was in her shallow tank. She also has a deeper one.

I’ve lived in the Greater Vancouver area for a long time and have seen some of the changes at the aquarium. When I first visited the facility when Skana and Hyak were alive, the whales that lived there performed the typical behaviours used to entertain the public at the time, including high leaps out of the water. Over time, the cetacean shows were gradually toned down and became more educational. The whales and dolphins eventually performed relatively simple behaviours, such as displaying a flipper, their caudal fins (or tail), or their belly as the announcer described their external anatomy and then demonstrating their swimming ability.

It’s true that getting a close view of a cetacean is educational and fascinating and that captive animals can help wildlife researchers learn more about their species. In my opinion, this isn’t a justification for keeping cetaceans in captivity. They are intelligent beings that roam for long distances in their natural habitat and often live with many others of their kind. Keeping them captive in a small tank with little to do is a horrible fate for them to face.