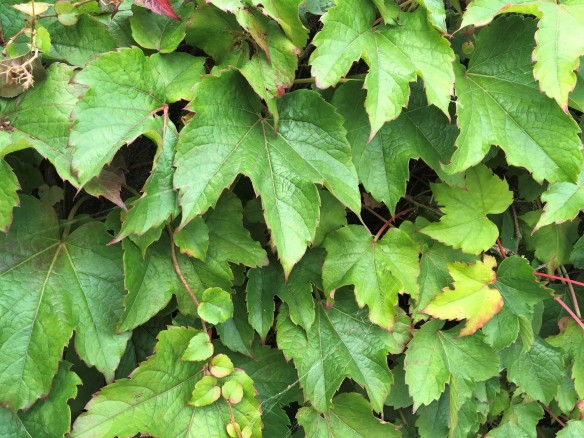 Boston ivy in the Italian Garden

The Italian Garden in Vancouver is a lovely place. Sculptures, fountains, and plants combine to create a beautiful and peaceful scene, especially in summer. Two of the ornamental plants in the garden are Boston ivy and the Virginia creeper. They are an attractive sight and have some interesting features.

Boston ivy is a vine that enthusiastically climbs trellises and arbors and clings to fences and walls. Despite its name, it’s native to Japan, Korea, and China, not the United States. It’s a popular plant in Canada as well as the US. The plant’s scientific name is Parthenocissus tricuspidata. Its leaves have a palmate form and generally have three lobes, which the species name references. The lobes of the leaves have a toothed margin. The plant belongs to the grape family, or the Vitaceae.

Boston ivy is valued for its attractive summer appearance and its beautiful autumn one. It produces small, greenish-white flowers and dark blue berries. The berries are poisonous for people and pets due to the presence of chemicals called oxalates. Assuming that the berries are safe because the plant belongs to the grape family could be dangerous.

Unlike the English ivy plant, Boston ivy is deciduous. In the fall, the leaves develop a rich red colour that many people appreciate. The red may be even deeper than in the photo above. Like many cultivated plants, Boston ivy is available in different varieties that have slightly different characteristics. Someone interesting in buying the plant should investigate the features of the different kinds.

The plant produces tendrils with adhesive pads at the end. These are sometimes known as holdfasts. They attach to surfaces as the plant climbs. The attachment is very strong. It’s best to plant Boston ivy beside an item like a trellis rather than a more expensive structure. If it’s allowed to climb walls, it may be hard to remove the plant without damaging the wall. It’s also necessary to prune the vine regularly so that it doesn’t cover windows or enter gutters or other areas where it could cause problems.

The ability of the plant to climb and spread can be useful in covering an eyesore, though its growth needs to be kept under control. The photo above was taken in 2007. I don’t know whether the building is still covered with ivy today. One point to keep in mind when the goal is to deliberately cover an object with a heavy growth of ivy is that the weight of the plant may damage the object.

“The Ivy League” is a group of eight private universities located in the northeastern part of the United States. The name is often used with respect to the athletic teams of the institutions. It’s believed to have risen from the growth of Boston ivy on the walls of some of the buildings of the colleges.

A Virginia creeper in the Italian Garden

The Virginia creeper belongs to the same genus as the Boston ivy but to a difference species. Its scientific name is Parthenocissus quinquefolia. The species name refers to the five lobes of the leaves. The very young leaves may have only three lobes, however. The plant is native to eastern and central North America and to part of South America.

Like Boston ivy, the plant is a climber and is deciduous. It also travels over the ground. The leaves are red when they first open, turn to green as they mature, and become red or even maroon in the autumn. The plant produces greenish flowers and blue berries. 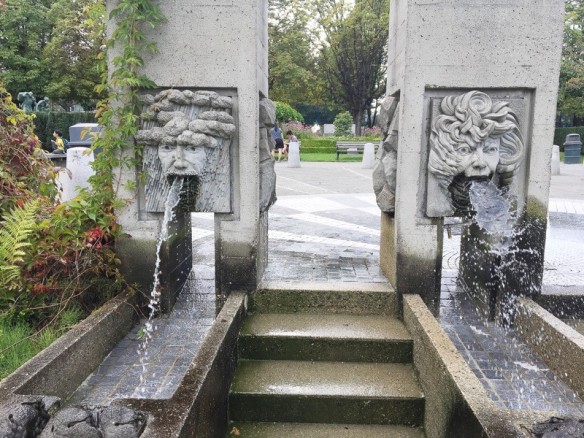 Fountains in the Italian Garden with Virginia creeper on the left

The photo below shows a Virginia creeper growing beside black-eyed Susan flowers and characters along the Opera Walk in the Italian Garden. The walk shows the heads of leading characters in famous Italian operas. I’ve described the opera characters in a previous post. The singing woman in the photo below is Turandot.

The large, bird-like figure in the background was part of a recent exhibition that included animated dinosaurs. The model depicts Quetzalcoatlus, which was a large pterosaur (a flying reptile), not a dinosaur. 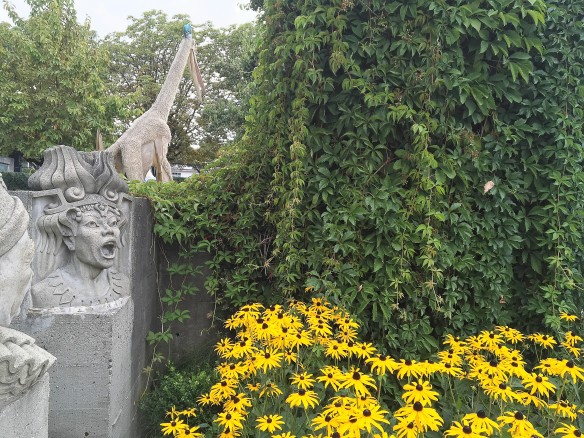 Virginia creeper by the Opera Walk in the Italian Garden

The berries of the Virginia creeper are eaten by some animals, but they are poisonous for humans. According to the USDA (United States Department of Agriculture), ingestion of the berries may be fatal. North Carolina State Extension agrees with this assessment. Some sources report less serious results of consumption of the berries. The results may depend on the number of berries eaten, the particular plant that produced them, and individual susceptibility,  but consumption should always be taken seriously when it happens in humans.

The plant is sometimes grown in public places or may be found in a friend or relative’s garden. Children should be taught about the potential dangers of picking any berries without a parent’s permission. In public areas or in places frequented by children, gardeners may cut the berries off a Virginia creeper plant for safety. This may not happen everywhere, however. I haven’t been to the Italian Garden in the berry season, so I don’t know whether the fruit is removed.

The toxic substances in the berries are oxalic acid and perhaps additional chemicals. According to NC State Extension, possible symptoms of poisoning include those listed below.

I have English ivy (Hedera helix) in my garden, but I’ve never grown Boston ivy or the Virginia creeper. Despite its similar name, English ivy is not closely related to the other two plants. I  don’t have any room for Boston ivy or the Virginia creeper in my garden, but I enjoy seeing them in the Italian Garden and in other places in Vancouver. They are interesting plants.