Engine 374 as seen close to Christmas

Yaletown is a neighbourhood in downtown Vancouver that offers many attractions. It’s located beside False Creek and the seawall. The area is a residential and shopping location and an appealing place for tourists. One item in Yaletown that I enjoy photographing is CPR Engine 374 in the Roundhouse Community Centre. This locomotive pulled the first transcontinental passenger train across Canada and into Vancouver. I also enjoy photographing the public artworks beside the water, including Street Light and Khenko. Each of these sculptures has an interesting feature that goes beyond static art.

False Creek is a narrow inlet connected to English Bay and contains sea water, despite its name. The name was created by an early explorer who first thought that he was travelling along a freshwater creek and later realized his mistake. The seawall beside the creek can be accessed from many places. The entire seawall path in Vancouver is a long route, but it’s easy to enter and leave the path and explore just a small section of it. 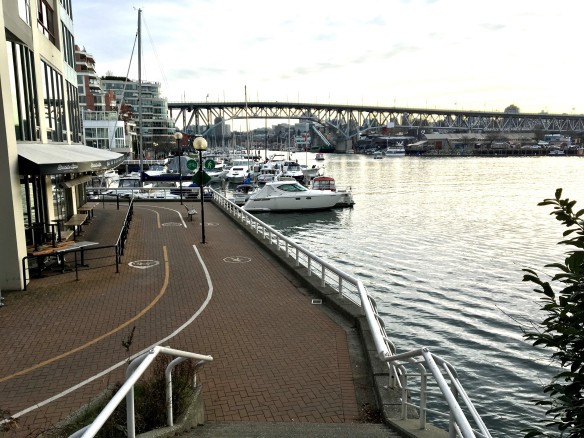 Yaletown was once an industrial area that contained rail yards, warehouses, and saw mills. Its name is derived from that of a town named Yale, where the CPR (Canadian Pacific Railway) once had their construction and repair facilities. These facilities were moved to an area beside False Creek towards the end of the nineteenth century. The area became known as Yaletown.

For a while, Yaletown was very successful. As the use of trucks for transport increased and the use of rail declined, however, Yaletown also declined. The area was gradually abandoned and soon contained many vacant lots. The rejuvenation of the area began in the 1970s and 1980s. Young people were attracted by disused warehouses for their business and even as a residence. The neighbourhood gradually developed a trendy atmosphere, a process that continues today.

Modern buildings and skyscrapers have been created in the neighbourhood, shopping options have increased, and interesting restaurants have appeared. In one part of Yaletown, however, the old buildings have been preserved to create “streetscapes”. Shops, restaurants, and bars have been created in former warehouses. The area enables people to see some of Yaletown’s past. In an interesting mix of the old and the new, it provides free WiFi access. 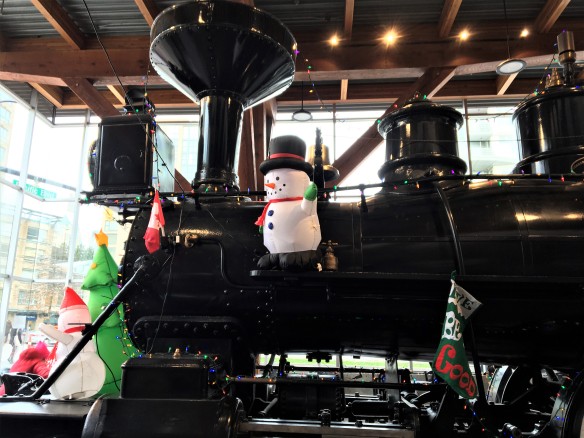 CPR Engine 374 is located not far from Yaletown Dock in a special enclosure at the Roundhouse Community Arts and Recreation Centre. It’s free to visit. “CPR” stands for Canadian Pacific Railway.  The company played an important part in Canada’s history and still exists, but it now transports goods instead of passengers. Engine 374 was built in 1886, rebuilt in 1914, and taken out of service in 1945.

On May 23rd, 1887, Engine 374 pulled the first train carrying passengers that had travelled (almost) the entire distance across Canada. It was said to be the first locomotive to transport people from coast to coast in the country. To be technically correct, it should be noted that the train didn’t reach Vancouver Island and so it didn’t really travel all across Canada. The island is separated from the mainland by the Strait of Georgia and is reached by ferries and planes today. The inhabited islands on the eastern side of Canada were also avoided.

In 1886, Engine 371 pulled a train into Port Moody, a city located near Vancouver. Engine 374 pulled the first passenger train to the west coast, however. In addition, it travelled further by going along the new extension from Port Moody to Vancouver, so it did deserve the honour that it received. The train’s arrival in Vancouver was marked by a celebration that included a crowd of people, hundreds of flags, a band, and the sounds of ship horns from the nearby harbour. 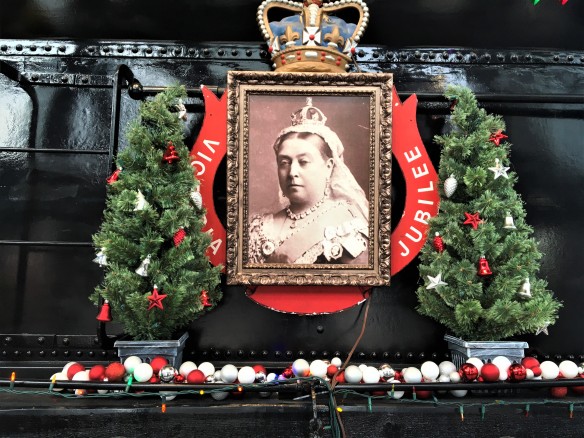 A short walk along the seawall will enable a person to see another interesting sight. Khenko is located in George Wainborn park next to False Creek and was created by a Vancouver artist named Doug Taylor. It was installed in 2006 and is forty feet tall. The sculpture represents a great blue heron, a common bird in Stanley Park that can sometimes be seen in False Creek.

The other structures in the Khenko sculpture are not simply decorative. They act as sails to catch the wind and as equipment to help move the bird’s body. When a wind blows, the heron’s wings move up and down, which creates the illusion that it’s flying through the air. Doug Taylor is known for his kinetic sculptures.

The word “khenko” is the Coast Salish name for the great blue heron. The Coast Salish are a group of First Nations people. Though my photos aren’t of sufficient magnification to show it, the heron in the sculpture has a fish inside its body.

During the industrial era of False Creek, many fish and wildlife left the area. The piece celebrates the heron’s return to False Creek as a symbol of hope and restoration.  (Quote from Doug Taylor in relation to his Khenko sculpture)

The day was overcast when I took the photos of the sculpture. Gloomy weather sometimes means that photos aren’t as attractive as they would be on a sunny day. I think that black, white, and shades of grey in a photo can be interesting, though. I like the limited colour palette and the sight of the bare branches and the sculpture against the sky in the photo below. 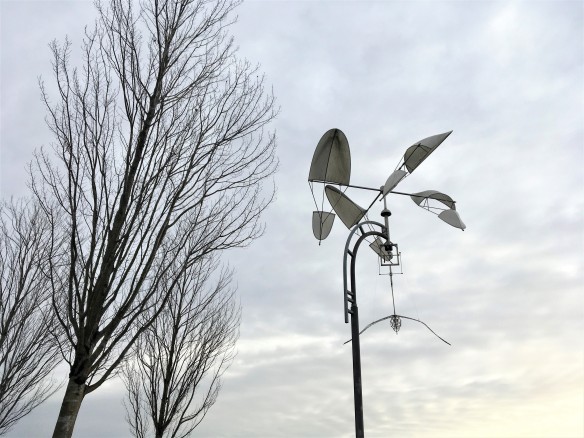 Street Light was created by Bernie Miller and Alan Tregabov and installed in 1997. The black poles and bars of the sculpture remind me of Yaletown’s industrial background. The poles are 12 metres in height. They bear eight photos showing historical scenes related to Vancouver. The photos have been etched onto metal plates.

When viewed from some angles, the photos appear to consist simply of lines. When looked at from a different position, images can be seen. Like the Khenko sculpture on a calm day, there is more to Street Light than is obvious. Multiple trips may be needed to see an additional characteristic of the sculpture. 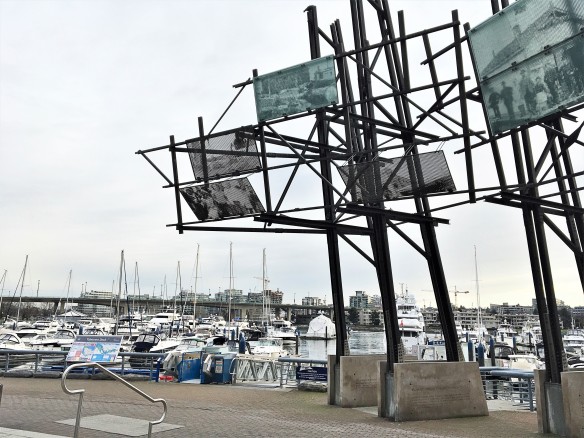 Unlike Khenko, Street Light is a sight that I want to photograph under other lighting conditions because it has some interesting features related to light. On a sunny day when the sun is at the right angle, the pictures in the sculpture cast a shadow image on the ground. The City of Vancouver website says that each picture panel has been positioned  very carefully. The panels are arranged so that the picture showing a historical event related to the current date produces the best shadow image.

One photo commemorates the Great Fire of Vancouver. On June 13th, 1886, when Vancouver consisted primarily of wooden buildings, a massive fire spread rapidly through the city. Many people died and the city was destroyed. The cause of the disaster was a fire set by Canadian Pacific Railway workers to clear an area of brush. The workers lost control of the fire and it spread. With great determination, officials made plans for rebuilding the city only twelve hours after its destruction.

The City of Vancouver website says that when the sun is shining on Street Light just before noon on June 17, the projected image of Vancouver’s “Great Fire” will be the best image visible on the promenade below. I don’t know whether they’ve made a mistake with the date, which is four days later than the date of the Great Fire. Whether or not this is the case, the thought and work that went into creating the sculpture is impressive.

Another view of “Street Light”

I often walk along part of the Stanley Park Seawall, continue along the path beside English Bay Beach and Sunset Beach, and then travel beside False Creek. It’s not necessary to walk to False Creek from Stanley Park, however. It can be reached in multiple ways.

Direct and relatively short routes from the centre of the downtown area of Vancouver to Yaletown exist. The dock and art above are located at the end of Davie Street. The area can also be reached by public transit, including buses and the SkyTrain system. SkyTrain is Metro Vancouver’s LRT or Light-Rail Transit system. Metro Vancouver is sometimes referred to as Greater Vancouver.

False Creek and the sites that border it can be explored by the Aquabus as well by walking along the seawall. The Aquabus system is a fleet of small boats that travel along the creek at frequent intervals and stop at popular places. They are wheelchair and bike accessible, like Vancouver’s public transit system.

False Creek and Yaletown are interesting places to visit for both local residents and visitors. I’ve found that there’s always something new to see and photograph in the area at any time of the year. The neighbourhood is worth exploring.