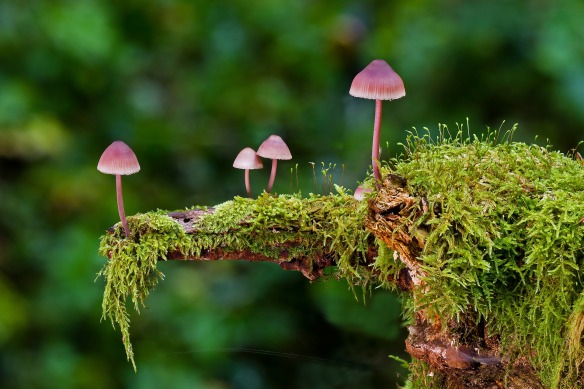 Mosses are attractive plants that add a beautiful splash of green to the landscape. I especially appreciate the sight of a moss patch in winter when the colours of nature are generally subdued. The plants appear on tree bark, grass, stones, concrete, tarmac, and even metal, depending on the species. Though some people may not appreciate a growth of moss on their property, I think that mosses are interesting organisms and a lovely sight when they are growing in the wild. 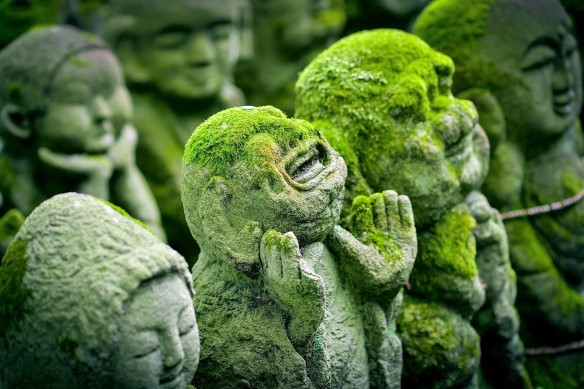 Mosses are small plants that belong to the kingdom Plantae and the Division Bryophyta. They are nonvascular and therefore lack vessels that transport food and water. In addition, they don’t produce flowers or seeds. Nevertheless, they do carry out photosynthesis and they do produce eggs and sperm. They produce spores instead of seeds.

A plant or plant-like organism with the word “moss” in its name may not be a moss. Spanish moss is a vascular plant in the pineapple family, for example. Iris moss is a red alga. Reindeer moss, oak moss, and Iceland moss are lichens. The body of a lichen consists of a fungus living in combination with another organism. The other organism is an alga or a cyanobacterium (a type of organism that used to be called a blue-green alga). Sometimes a third organism (a yeast) is present.

The vegetative stage of a moss’s life cycle is known as the gametophyte.  It has a stem and leaves and is attached to the ground by fibrous rhizoids. Some people don’t like the use of the terms “stem” and “leaves” with respect to mosses because these parts have a different structure from the ones in vascular plants. The terms are convenient to use, however. The leaves are sometimes referred to as phyllids. They surround the stem in a spiral fashion. The gametophytes grow in groups and form tufts, carpets, spongy mats, or drooping pendants on their substrate.

The cells in the leaves contain chlorophyll and carry out photosynthesis, making food for the plant. The rhizoids attach the gametophyte to its substrate. It’s often said that unlike the roots of vascular plants, the rhizoids don’t absorb water and minerals for the moss. This job is done by the above-ground parts of the gametophyte. Some researchers say that it’s not correct to say that the rhizoids absorb no nutrients at all, but the amount is much lower than in vascular plants.

The gametophyte of the moss actually consists of two stages. When a moss spore lands on a suitable substrate, it produces a horizontal, filamentous, and branching structure known as a protonema. The protonema is green and carries out photosynthesis. It lies flat against its substrate and sometimes produces a green coating resembling algae as it grows. It produces buds, though like the leaves and stem they don’t have the same structure as the buds of vascular plants. Each bud produces the leafy and more familiar stage of the gametophyte.

Interestingly, although the moss gametophyte doesn’t contain the xylem and phloem vessels that transport water and food in vascular plants, in some gametophyte stems cells that appear to perform a similar function have been found.

The term “gametophyte” means that at some point in time the plant produces gametes, or eggs and sperm. The female reproductive organ in the gametophyte is called an archegonium and the male one an antheridium. The archegonia and antheridia are found at the tip of the main stem or of a branch and are surrounded by leaves.

Sperm cells from the antheridia fertilize eggs cells in the archegonium. Each sperm cell has two long and thin extensions called flagella. These enable the sperm to swim to the eggs, as long as a film of water is present on the moss. The flagella are whip-like structures that beat, propelling the sperm forward.

A sporophyte is produced from the fertilized egg. It’s a stalked structure that emerges from the archegonium. The stalk, or seta, has a cap with a protective covering called the calyptra at the top. Inside the cap is a capsule and a lid called an operculum. Spores are produced inside the capsule by a process known as meiosis. The spores are released into the environment. If they reach a suitable substrate, they produce a new gametophyte. Most spores are carried to the substrate by wind. 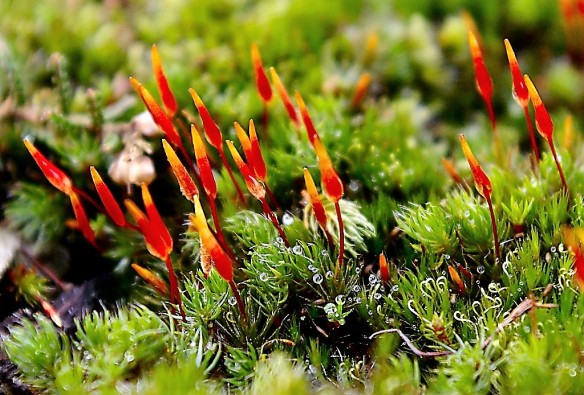 Biology students will likely need to understand the life cycle of a moss in more detail, especially in respect to ploidy. Ploidy is the number of sets of chromosomes in a cell.

The cells in the human body are diploid. This term means that the chromosomes in the cells exist in pairs. Each member of a pair bears genes related to the same characteristics of the organism.

One chromosome of each pair goes into the eggs and sperm, or the gametes, as they are produced. The gametes are therefore said to be haploid, since they have a single chromosome for each set of characteristics.

When an egg and a sperm combine to make the first cell of a new individual, or the zygote, each chromosome has a partner again. The cells of the zygote and of the offspring that it produces are therefore diploid.

The gametophyte of a moss is haploid, and so are the eggs and sperm that it produces. When a haploid egg and sperm join, a diploid zygote is produced. This then produces the stalked sporophyte, which grows out of the gametophyte and is also diploid. Inside the sporophyte, meiosis produces haploid spores. Each spore can produce a new gametophyte.

Mosses are versatile organisms. They can reproduce vegetatively, or asexually, by means of gemmae. These are bud-like structures that develop on the leaves or stem. When a gemma detaches from the moss, it grows into a new gametophyte.

Moss can also reproduce by fragmentation. Bits of moss that are broken off from a clump that can sometimes produce missing parts and become independent plants.

Sphagnum or peat moss is an interesting genus to explore. It’s found in British Columbia’s boreal forest in the northern part of the province. It’s also found in other parts of BC, including a bog not far from my home in the southern part of the province. The Sphagnum genus contains multiple species. Both living and dead cells of the moss can store large quantities of water.

Peat is a spongy material made from partially decayed plants. It forms in specific environments, such as bogs and swamps. Sphagnum is one of the plants that forms peat. Today the moss is used in horticulture. Historically, it has been used for several purposes. The ability of Sphagnum to absorb a large quantity of water led to its use as a diaper at one time. It has also been used to pack cavities in order to provide insulation and to give protection from drafts and sounds. It’s important that people don’t collect the moss from peat bogs today. This is not a sustainable activity. Peat takes a long time to form.

In emergency situations in the first world war, Sphagnum was used to packs wounds and help them heal. Today we should use sterile dressings to cover wounds. It’s not advisable to cover a wound with moss when these dressings are available and might even be harmful. The historical use of moss when not enough dressings were available is fascinating to explore, though.

British Columbia is one place where specific species of Sphagnum moss were harvested for use in World War 1. The moss absorbed the blood and other liquids in wounds and produced an acidic environment, which apparently helped to fight bacteria that could cause infection. The dressing may have been only weakly antiseptic, but it seems to have been very helpful. 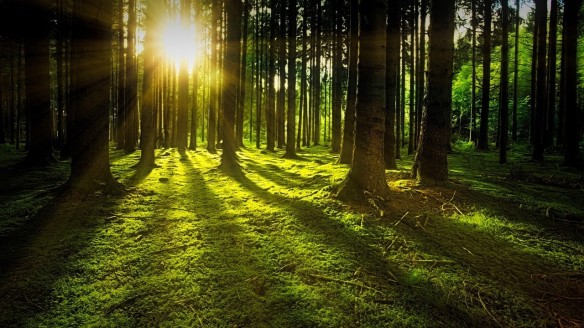 Mosses are very common where I live. I see them on nearly all of my walks and often stop to examine some of them. There’s probably a lot that can still be learned about the plants. They are small, but they aren’t as simple as some people believe. At least in the case of Sphagnum species, they are definitely mighty plants.

5 thoughts on “Biology Facts About Mosses: Small but Mighty Plants”