A rose in Stanley Park

As we gradually transition into winter, some interesting sights can still be seen in my part of the world. Some rose bushes display both flowers and fruits at the moment. The flowers are a lovely reminder of summer and the fruits, or hips, are a sign of nature’s productivity. Wild roses grow here, but the pictures in this article show cultivated ones. I appreciate garden and landscaping plants as well as wild ones, especially at this time of year.

Some roses are still in bloom in November, though it’s harder to find them and the blooms on a particular bush are often sparse. I’m delighted when I discover them. Each flower is like an unexpected jewel in the landscape. The photo above was taken in Vancouver’s large and beautiful Stanley Park in July. The one below was taken in November in an area nearer to my home next to a pedestrian overpass. The bushes there contain both flowers and hips and are doing quite well at the moment, which pleases me.

Rose flowers and hips that I discovered in early November

Roses belong to the apple family, or the Rosaceae. They are perennial plants. Most species are deciduous and lose their leaves in winter. The flowers of wild roses have a single row of five petals. Though the flower structure is not as elaborate as that of many cultivated plants, the blossoms are still a lovely sight. They are pale pink to deep pink. Wild roses are my favourite type because of their natural condition and beauty and because they are lovely to see on my nature walks away from cultivation.

Like many (but not all) cultivated roses, the stems of wild roses bear thorns. The leaves are attached to the stem in an alternate pattern. Each leaf consists of smaller leaflets, which are arranged in a row on each side of the central leaf stem, or petiole. A terminal leaflet is present at the tip of the leaf. The leaf is said to be pinnately compound due to this pattern. The leaflets are toothed.

Cultivated roses are divided into different categories. Species roses form the group that is most similar to wild ones. Other groups contain flowers with multiple layers of petals. The variety of plants available for a cultivated rose enthusiast is impressive.

Rose hips in a small park near my home

The beauty of roses has created some enduring symbols. For example, red roses are often used to express love. Pink roses express gratitude. White roses are a symbol of innocence, lavender ones represent enchantment, and orange ones passion. Of course, roses can mean whatever we want them to or have no meaning other than their beauty and their possible benefits for insects.  Red roses seem to be a strong symbol of love, however, or at least many florists would like us to believe this.

Wild roses contain nectar that attracts insects as well as pollen that bees gather.  The situation may not be the same for cultivated plants. Cultivated species may produce nectar and pollen in only small quantities or may have such complex flowers that it’s hard for insects to reach the interior. I think this is an important factor to consider when choosing roses for a garden or a landscaped area. Bees need our help. 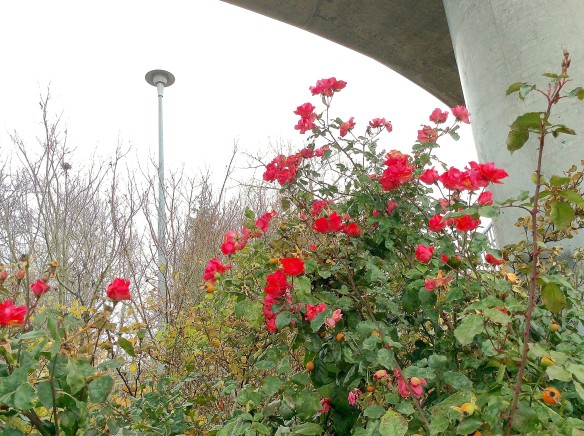 Roses are also appreciated for the oil that they contain. The oil is extracted from the petals of specific types of roses and from the seeds of rose hips. Rose petal oil is added to perfumes and to some foods, such as Turkish delight. It’s important that oil bought from a store isn’t added to food at home, unless it’s certified as a food-grade oil.

Different names are used for rose petal oil depending on how it’s obtained. The main products produced by oil extraction are described below.

Rose water is a more dilute product than the three mentioned above. It’s made by simmering rose petals in hot distilled water and can be produced at home. The heat and soaking might remove undesirable chemicals from the petals as well as useful ones, so flowers that haven’t been exposed to pesticides or pollutants (as far as can be controlled) should be used. The safe preservation of the rose water once it’s made is also a concern. Anyone interested in making the solution should look for detailed instructions for its manufacture and safe use.

The colour of rose hips ranges from orange to red. The hips are edible, though it’s not wise to pick them wherever they’re seen. Pesticide use and pollution exposure are important facts to consider. So is the correct identification of a plant. I only eat hips that come from wild plants. It should be noted that though I eat the hips in small quantities and the fruits are said to be edible by seemingly authoritative sources, I don’t know for certain whether the fruits of all of the myriad rose varieties that exist are edible. The ones that I eat taste quite like apples, which also belong to the family Rosaceae.

The seeds of a rose hip should be removed before it’s eaten. Some hips contain more flesh than others. Some are very seedy and may not be worth eating or collecting. Some people make a jam, jelly, or infusion from the flesh.

An oil is obtained from rose hip seeds and is used in the cosmetics industry. It’s said to have an earthy aroma rather than one resembling the scent of roses. When buying a produce containing rose oil, it’s probably a good idea to check whether the oil comes from the petals or the hips.

Roses are beautiful and useful plants. I’m not surprised that they are so popular. I’ll be sad to see the flowers disappear in my area as winter arrives, but it’s good to know that new ones will almost certainly appear in the spring.

7 thoughts on “Rose Flowers and Hips in Autumn: Plant Facts and Fall Thoughts”