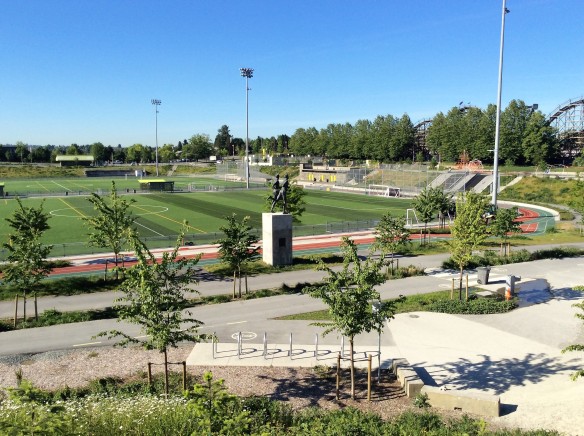 Empire Bowl and the Bannister and Landy Statue

In 1954, Roger Bannister from Britain and John Landy from Australia competed in an athletic event in Vancouver that became famous. Both men had separately set a world record that year, running a mile in under four minutes. In August, the men competed together in the British Empire Games in a much-anticipated event. There was said to be a “media frenzy” when the athletes arrived in the city. Landy lead for most of the race with Bannister not far behind. On the last turn, Landy looked over his left shoulder to see where Bannister was. Bannister raced by him on the right and hit the finish line first. Both men ran under four minutes.

The event has become part of athletics history and was the first time that two people had run a mile under four minutes in the same race. The event has been memorialized by a bronze sculpture showing the runners at the critical moment in the race. Landy is looking in the wrong direction while Bannister surges ahead. Jack Harmon created the sculpture in 1967 based on a photograph of the scene. It’s valued because it represents an important and emotional moment in sports history. 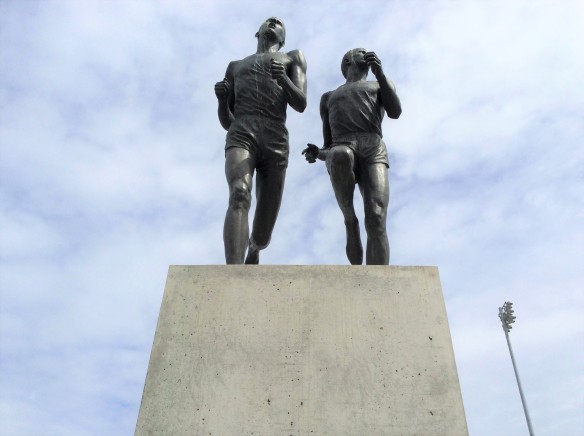 A close-up view of the statue

The statue of the athletes has been placed at the Empire Bowl, which is located in the eastern section of Vancouver. The site once housed the Empire Stadium, a structure that has been demolished. The statue is located not far from where Landy turned his head and lost the race in real life. The figures remind me of the event every time I see them, which I think is an important function of some works of art.

The figures don’t look like those of the real athletes, but it seems to me that their similar faces and bodies could represent everyone involved in a struggle or trying to achieve a goal. I think the sculpture could be interpreted symbolically as well as being a reminder of an athletic event. Another possibility for the similarity was that the sculptor wanted to indicate that the men were of equal athletic ability and that either one could have come first or second.

Both men ran a mile under four minutes before they met in Vancouver. Bannister was the first man to do it and set a world record on May 6th, 1954. His time was 3 minutes 59.4 seconds. On June 21st of that year, Landy broke Bannister’s record with a time of 3 minutes 57.9 seconds. On August 7th, 1954, the pair met in the Empire Games. They didn’t set a new world record, but that didn’t seem to dim the excitement of the event.

The photo below shows the similarity in the figures. The statue has a different background from my photos. The Empire Stadium was demolished when a better sports and entertainment area was created elsewhere in the city. The stadium area temporarily became a parking lot for the popular fair at the Pacific National Exhibition in Hastings Park. The statue was moved to the front of the exhibition grounds, which forms the background of the photo below. Later, when the parking lot became a green area again, the statue was moved back.

A close-up view of the statue (Photo by Paul Joseph, CC BY 2.0 license)

The Empire Stadium was dismantled when the BC Place stadium in downtown Vancouver was created. The newer stadium is a modern building with a retractable roof that takes about twenty minutes to open or close.

At one point in recent history,  a decision was made to replace the roof with a better version. While this replacement was happening, the site where the Empire Stadium had once existed became the Empire Field. The area substituted for the downtown stadium. Tiered seating was placed around the field for spectators to watch events. Once the retractable roof of the downtown stadium had been replaced, the professional sports teams that had moved to the field returned to BC Place. The Empire Field was then turned into the Empire Bowl, which is used for amateur sports today.

Empire Bowl is a pleasant area surrounded by attractive landscaping. The site in which it’s located is known as Hastings Park. The park contains multiple facilities and attractions. The wooden roller coaster on the right of the background in my first photo is part of an amusement park called Playland, which is also located in Hastings Park.

The plaque on the statue’s pedestal

Roger Bannister was a medical student at the time of the Vancouver race. Although running meant a lot to him, a medical career seems to have been his main goal. He continued his medical studies after he retired from athletics and became a respected neurologist. He married an artist in 1955. The couple had four children. Bannister was knighted in 1975 and received many honours in his life. He was diagnosed with Parkinson’s disease in 2011. He died in 2018 at the age of eighty-eight.

John Landy is currently eighty-nine. He was an agricultural student at the time of the famous race and is an enthusiastic naturalist. He has written two natural history books. For much of his life, he worked as an agricultural researcher at ICI (Imperial Chemical Industries) in Australia. He served as the Governor of Victoria from 2001 to 2006. He has received an MBE and, like Bannister, many other honours. Landy married in 1971. The couple have two children.

Athletic records continue to fall for both men and women. People are openly wondering if and when we’ll reach the limit of achievement for the human body. That’s a very interesting question to consider.