Deer Lake Park in Burnaby, British Columbia, is a lovely place to explore nature within the city. It also contains some interesting heritage buildings that were once prestigious homes. Based on the experiences of multiple people, one of these buildings is said to be haunted by ghosts.

The building containing the Burnaby Art Gallery is the centre of the paranormal activity. It’s the attractive and internally ornate mansion shown above. In its former life, the building was known as Fairacres Mansion and sometimes as Ceperley Mansion. It was finished in 1911 as a home for Henry and Grace Ceperley. Grace is one of the ghosts that is said to haunt the gallery.

According to Heritage Burnaby, the man standing in the centre of the photo above is Henry Ceperley and the woman on his left is Grace. The other standing lady is the couple’s daughter Ethelwyn. The children are Ethelwyn’s. The house still exists, as can be seen in the first photo in this post, but the expansive lawn in front of the house has gone.

Henry Ceperley was a businessman from the U.S. He came to Burnaby in 1909 with his wife Grace, who was also American. They hoped to find a peaceful and attractive place to live in the farmland around Deer Lake. Burnaby was a much quieter area at that time than it is today. Even today, however, the city has pockets of beautiful and natural or almost natural habitat.

When most people today hear the name “Deer Lake Park”, they probably think of the lake and the walking trails through the treed area around the lake. In the past, the name also referred to an area next to the lake that contained some large and expensive homes. The Fairacres mansion is not the only heritage home that can be admired in the area today.

Fairacres was designed by Robert Twizell (1875–1964), a British architect. Grace apparently loved the gardens of the house and spent much of her time there. She also loved children and supported causes involving young people. Sadly, in 1917 she died.

When Grace died, it was revealed that she was actually the owner of the house. She had become wealthy due to a bequest from her brother-in-law. She left the house to her husband in her will. He sold it three years later and returned to the United States. His behaviour is often suggested as a reason for Grace’s haunting of the house and the area which was once its grounds.

Grace’s will stipulated that if the house was sold, money from the sale of Fairacres must be used to create a children’s playground in Vancouver’s Stanley Park. Henry didn’t provide this money, at least not immediately. The playground was created, but only after Henry himself had died in 1929. Grace is supposedly upset by this. I often think that it’s unfair to blame Henry for wrongdoing or for the haunting when he can’t explain what happened and we can’t observe the wording of the will and investigate the situation properly. 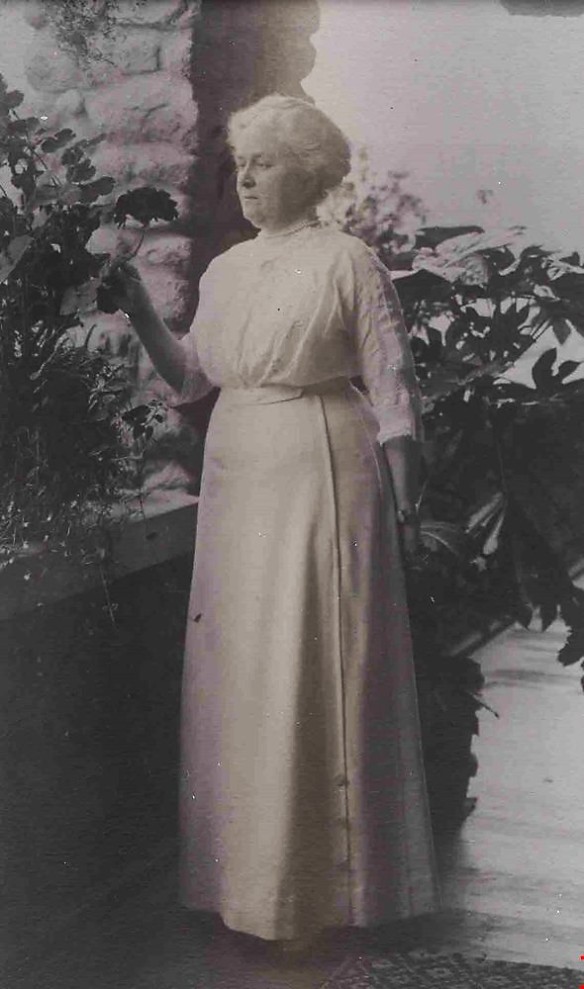 Grace Ceperley on the porch of Fairacres Mansion (Photo from Heritage Burnaby, no known restrictions)

The house had a somewhat unhappy history after Henry left it. First, it became the tuberculosis ward for the Vancouver General Hospital. TB was a much more serious disease at that time that it is today and people frequently died from the infection. Later,  Fairacres became a home for Benedictine monks, which appears to have been a peaceful time for the building. Then it housed the Temple of More Abundant Life, which is described today as a cult. The cult has been associated with some unpleasant activities which are said to have included child abuse. That would likely have been very upsetting for Grace if she knew about it.

After the cult left, the home became a residence for a Simon Fraser University fraternity. This is when reports of paranormal activities began. In 1966, the Municipality of Burnaby bought the home for use as an art gallery. (Burnaby didn’t become a city until 1992.) As renovations in the building were performed, the unusual activities intensified.

Another view of Fairacres (Photo by Mybec, CC BY-SA 3.0 license)

Reports of paranormal activities in relatively recent times include the sound of footsteps on unoccupied floors of the gallery as well as other strange noises from apparently empty areas. Children have been heard crying, once again with no apparent cause. There have even been reports of visible but “ethereal” children on the third floor who run way after being seen. Other disembodied voices have been heard and sudden and dramatic drops in temperature have chilled people in the building.

On one occasion, a man who was working alone in the basement of the art gallery had his tools beside him. He repeatedly found that when he turned away, the tools were taken by an invisible entity and hung on the hooks on the wall .

Multiple people say that they’ve seen a woman in a long white dress of a style from an earlier time. She appears in the house or its surroundings and moves through the walls of the building as she walks. The woman often looks like a real person, but sometimes she is faint and wispy.  She is assumed to be Grace Ceperley. Grace is said to carry a strong emotion with her. Some people sense tranquility associated with her, while others sense sadness. A man seen at the top of the stairs in an old-fashioned outfit is assumed to be Henry Ceperley, so perhaps Grace is not alone.

Many unusual activities at Fairacres have been reported over a long period of time. Even if only some of these reports represent real or abnormal events, the situation is very thought-provoking. Various mediums and psychics have visited the mansion to try to resolve the situation and the paranormal activity appears to be currently weaker. If the ghosts are real entities, I hope they’ve found happiness, whether or not they are still associated with the mansion.