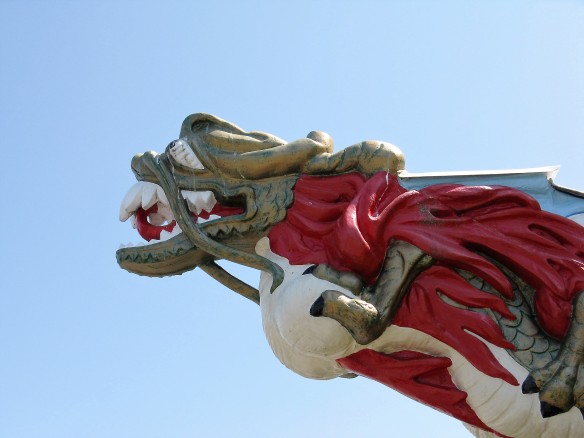 The figurehead of the Empress of Japan (Photo by Linda Crampton)

The path along the Stanley Park seawall in Vancouver offers many attractions. One of these is a colourful replica of a ship’s figurehead. The ship was called the RMS Empress of Japan. She was an important part of Vancouver’s maritime history in the late 1800s and early 1900s.

The real figurehead of the ship still exists and can be seen by the public. It’s located in the Vancouver Maritime Museum in Vanier Park, where it’s protected from the elements. The original sculpture is made of wood while the replica is made of fibreglass.

A figurehead was once a common part of a ship. It was a decorative figure or item placed in a noticeable area, which was usually the bow. In the twenty-first century, a figurehead seems to have disappeared from most ships, but for much of history it was valued. It wasn’t a random piece of art but had a particular meaning linked to the ship, its voyages, or the sailors. Some figureheads were religious symbols, for example, while others represented beings of power, such as dragons. 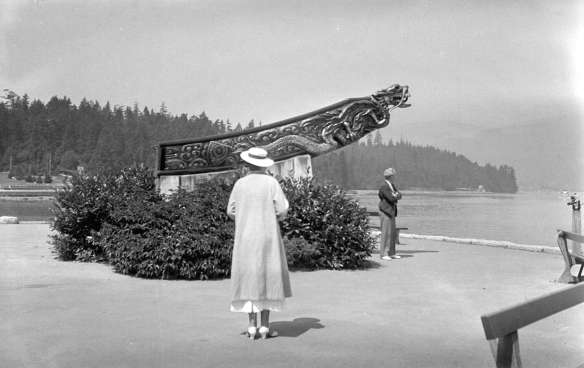 The real figurehead from 1936 in the same location as the replica today (Photo from the Vancouver City Archives, public domain license)

The Vancouver Maritime Museum says that the original figurehead was probably carved in Japan and installed on the ship in 1890. It also says that a dragon was “a symbol of imperial majesty”. I imagine that the idea of power and majesty was a great match for the ship.

The black and white photos in this post come from the collection of Major James Skitt Matthews (1878–1930) and have been given a public domain license by the City of Vancouver Archives. Major Matthews may or may not have been the photographer. He’s left us a lovely record of Vancouver history.

According to the plaque located under the monument today, the original wood carving was restored in 1928.  The wood had been damaged by many years outdoors and by repeated ocean exposure. The extent of the “restoration” is unclear, however. Apparently, there wasn’t much concern about factors such as using the original colours for the sculpture.

As the years passed, the dragon continued to deteriorate. The replica was cast from the original sculpture in 1960. The original was retired and eventually underwent a major restoration by experts at the museum. It’s currently on display for visitors to see. 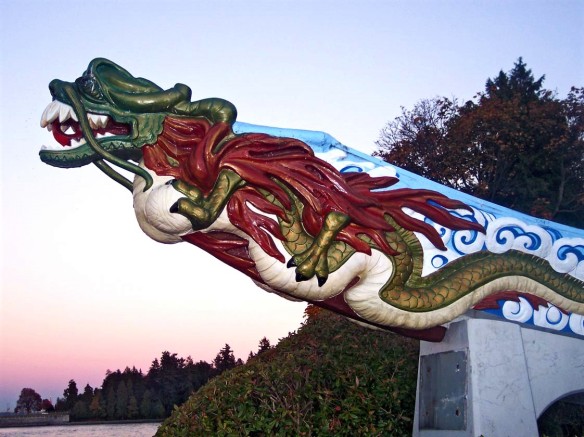 A view of the figurehead from 2006 (Photo by Bobanny, public domain license)

The RMS Empress of Japan was built in Barrow-in-Furness in England and was active from 1891 to 1922. She was also known as the White Empress due to the colour of her hull. The ship transported goods and passengers across the Pacific Ocean between Asia and Vancouver. She reportedly made 316 crossings. She contained elaborate decorations and furnishings in the first-class section.

The ship was operated by the company that ran the Canadian Pacific Railway. It was part of a fleet of three ships that extended the railway’s reach beyond Canada. The other vessels were the RMS Empress of China and the RMS Empress of India.

RMS Empress of Japan was officially launched in Liverpool by Lady Alice Stanley. She was the daughter-in-law of Lord Frederick Stanley, the Governor-General of Canada. The Stanley Cup award in hockey was named in his honour. 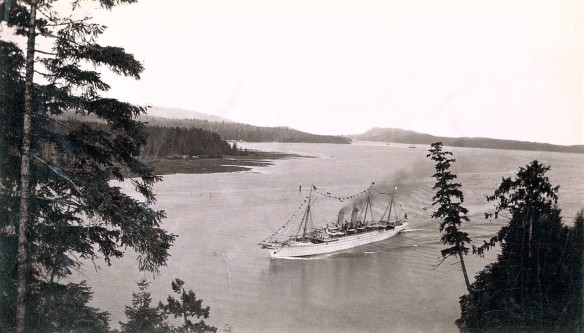 In 1914, the Empress of Japan was refitted to contribute to the war effort. After the war, she returned to her regular route. She was retired in 1922 and stayed at anchor until 1926. She was finally scrapped on a muddy beach in the city of North Vancouver and her figurehead discarded. It took two years to completely dismantle her.

The ship and its crew became a notable part of Vancouver culture during the vessel’s heyday. School children were reportedly taken to see the ship leave and enter the Vancouver harbour. Some people were upset by the sad end for such an important part of the city’s maritime history. People rescued parts of the vessel and made use of them in their homes or on their property.

The publisher of a local newspaper was angry that the figurehead had been discarded like trash. He sent some of his reporters to look for the dragon. They eventually found it. Thankfully, it doesn’t sound like it was seriously damaged by the disposal. It was put on display in Stanley Park in 1927. 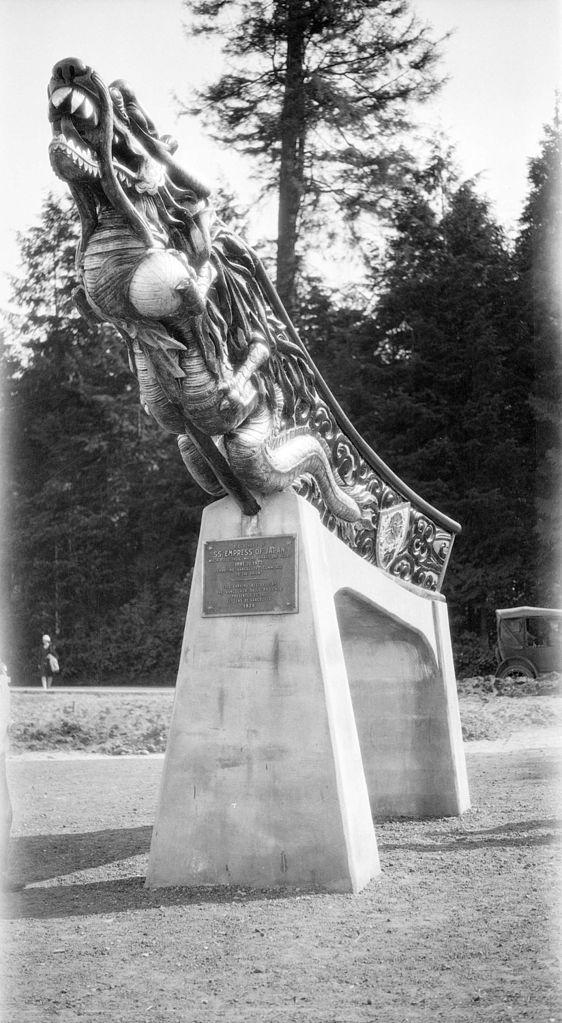 The figurehead as it existed circa 1928 (Photo from the City of Vancouver Archives, public domain license)

In 1930, Canadian Pacific bought another ship and named her RMS Empress of Japan. When doing research about a ship named the “Empress of Japan”, it’s necessary to identify which vessel is actually being discussed. Another potentially confusing point for a researcher is that some ships—including the second RMS Empress of Japan—changed their name during their lifetime.

The Empress of Japan figurehead has an interesting design. I find its link to the past even more interesting than its appearance. Photos of the ship have survived. It’s nice to have tangible evidence of its existence, even though visitors can’t touch the real figurehead in the maritime museum. The ship’s bell, a stained-glass window, and other items from the vessel are also part of the museum display. The museum contains a model of the ship as well.  I think that history is intriguing, especially when both facts and items from the past exist.