Walking is a wonderful way to observe the world. In this article, I share photos of nature that I took near the end of October as I travelled along a walking trail near my home. Many leaves had fallen from the trees, but some persisted. Those on a few trees had barely changed colour.  Many October leaves transform their appearance and drop to the ground before winter comes in my area, but some save the moment for a grand finale to autumn in November.

Though the trees near my home put on a lovely show in autumn, the fungi are also interesting. Fall is the best time of year to see mushrooms. They often surprise me by suddenly appearing in areas that I investigated not long ago. The Amanita mushrooms above are attractive but poisonous. Their colour ranges from yellow to bright red.

Mushrooms are a great reminder of the invisible activity in the soil or in a log or tree stump. The thread-like hyphae of a fungus spread through the substrate, releasing digestive enzymes into the environment and then absorbing nutrients. The mushrooms are the reproductive structures of the fungi. They release spores, which germinate to produce hyphae in a new area. Though I know these facts in theory, the appearance of mushrooms “brings it home to me”, as the saying goes. There is a hidden world of life below our feet when we walk over grass, soil, and other natural areas. It’s an intriguing thought.

Trees in the sun

I think that yellow leaves illuminated by sunlight and backed by a blue sky make a lovely sight. Multicoloured leaves are beautiful, too. Though the two deciduous trees in the photo above have lost lots of their leaves, their seemingly skeletal remains are still alive. I sometimes have to remind myself of this fact during the coldest and wettest part of winter. I look forward to the production of new leaves in the spring as the trees regenerate.

British Columbia has lots of coniferous trees, so we have some greenery during the winter. The trees are dark green, though. We miss the vibrant colours of nature in winter. The relatively mild winter climate in the southwestern part of the province allows a few colourful plants to be grown in gardens and landscaped areas, however. They’re always interesting to see. 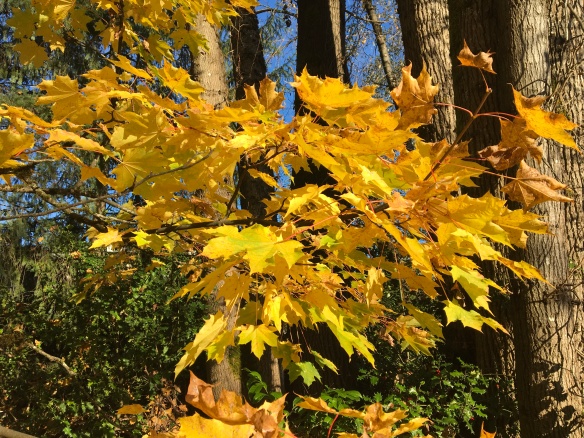 More golden leaves in the sun

Though some people may find red leaves the most attractive ones in autumn, I often prefer the yellow ones. I love the golden glow of the leaves in the sun. It’s such a cheerful sight. The colourful leaves of autumn always seem like a plant is giving me (and other people) a “farewell for now” gift before a winter rest and then a busy spring.  The idea is reinforced as the leaves drift or are blown to the ground.

The yellow colour of the leaves is produced by pigments called carotenoids. They were in the leaf all year but were hidden by chlorophyll until the fall. Carotenoids help chlorophyll do its job by absorbing light energy. As the green chlorophyll breaks down, the carotenoids become visible. The red colour in the leaves is produced by anthocyanins, pigments made in the fall. Scientists aren’t certain why the anthocyanins are made when the leaves will soon drop to the ground. The leading theory seems to be that they protect the leaves from sunlight damage and enable them to collect nutrients for the tree right up to the last moment.

An autumn plant mixture on the ground

Looking down can be just as interesting as looking up during a nature walk. Chestnut leaves and fruits, maple leaves, feathery yarrow leaves (which are still alive in October), and grass can be seen in the photo above. I didn’t alter the position of any item in the photograph. Nature is very capable of creating an attractive scene by herself.

An American sweet gum tree in the fall

The sweet gum trees planted in landscaped areas have lost a lot of their leaves by the end of October, but some persist. They are a lovely shade of red. The spiky fruits or gum balls still hang from the branches. The tree is an interesting and often attractive plant, though some people find the gum balls annoying. I have read that in areas where many balls are on the ground, the fruits can sometimes make walking tricky.

I’ve collected some gum balls and plan to use them in crafts. Some people make Christmas ornaments from them, which seems like a nice idea. I’ll probably collect more of the fruits in the near future. Sweet gum trees grow in several park-like settings near my home. so lots of gum balls are available.

Part of the walking and cycling trail in early October

The trail shown in the photo above is the one where I took the rest of the photos. They weren’t all taken in the same part of the trail, however. The path runs through a suburban area and is divided into sections separated by crossings over residential roads. Each section has slightly different features. They are all bordered by plants, but some borders are wilder than others. All of them enable me to observe both cultivated plants and wild ones during my neighbourhood walks.

The splash of yellow on the bench in the photo comes from a potted plant that is in flower. The bench has a plaque dedicated to a loved one who has passed on. A gentleman (whom I assume is either the husband or the brother of the lady mentioned in the plaque) has decorated the bench. In the growing season, the strip of soil around the bench contains plants. I sometimes see the man tending the area. It’s a lovely memorial. The journey along the trail is always enjoyable, for multiple reasons. Each season has its own pleasures. The fall colours are an enjoyable part of an autumn walk.

4 thoughts on “Nature Scenes Beside a Walking Trail in October”