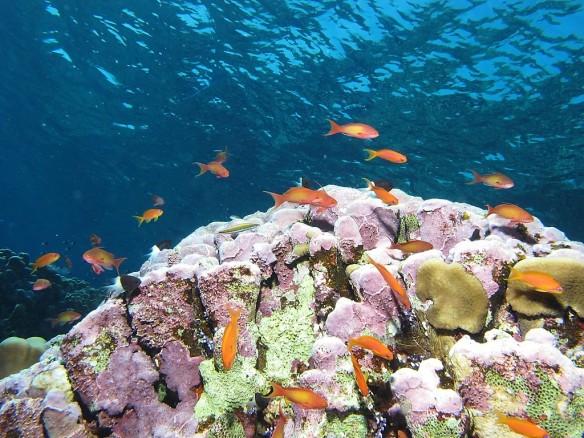 Coralline algae are marine organisms that play important roles in ocean ecosystems.  Researchers at the University of British Columbia and the Hakai Institute have shown that more species of coralline algae exist in BC than was previously realized. What looks like a mass of one crustose species growing on rock (and perhaps on coral) is at least sometimes a mixture of species. Identifying the effects of each species could be important. Discoveries suggest that some may be helpful in strengthening a coral reef. Others may help to maintain kelp forests, which are vital ecosystems and are in trouble. Still others might attract useful creatures to the coral reef or might be able to withstand climate stress better than other species.

Corallines play really important roles in their ecosystem, from cementing coral reefs together to giving off scents that attract other species like sea urchins, abalone, corals, and kelps to the area. Some coralline species are better at attracting organisms than others and respond to climate stressors like rising ocean temperatures in different ways. (Patrick T. Martone, University of British Columbia)

Coralline algae belong to the division Rhodophyta, also known as the red algae division, and the order Corallinales. They are often red or pink in colour but may be purple, blue, brown, or grey-green instead. They exist in two forms—an articulated or geniculate one and a crustose (non-articulated or non-geniculate) one. Both types contain calcium carbonate in their cell walls, which gives them a hard texture and their name. They don’t look like typical algae, which have soft bodies. They are common organisms, but they haven’t been well studied.

Coralline algae obtain their food by photosynthesis and are found no deeper in the water than light will penetrate. In 2016, the first fresh water species was discovered. All of the other known species live in sea water.

The articulated form grows upward or hangs downwards and has branches. It sometimes looks like a small tree or a fern frond. Joints in the thallus (the organism’s body) lack calcium carbonate. This factor give the algae flexibility and enables them to be moved by ocean currents without being harmed. They are attached to a substrate by a structure called a holdfast. Substrates include rocks, shells, coral, algae, and sea grass.

Crustose species are flat and grow on rocks and coral. As their name implies, they often look like a crust growing on a hard surface. Some are said to look like bubble gum spread over the surface of a reef. In intertidal areas, they may look like paint spread over a rock. The crustose type was studied by the British Columbian researchers.

Crustose coralline algae are often found on coral reefs. A coral is a marine organism that exists in the form of a polyp. A polyp is a sac-like structure that has stinging tentacles surrounding a mouth at the top of its body. The tentacles catch food and pass it to the mouth. The food is digested in the interior of the sac. Wastes move in the opposite direction from food and are eliminated through the mouth.

Colonial coral polyps secrete a cup-like skeleton of calcium carbonate. A polyp can withdraw into the cup for protection. The polyps in a reef are connected to one another by a band of living tissue called the coenosarc.

A coral polyp feeds on the creatures that it catches with its tentacles. Some polyps contain tiny organisms called zooxanthellae in their tissues. These organisms are photosynthetic. The coral uses some of the food that the zooxanthellae produce. The reliance on this food may be so strong that corals are harmed if they lose their zooxanthellae during a bleaching event.

Researchers from UBC and the Hakai Institute (which is also located in British Columbia) have made some interesting discoveries about the web of life in the ocean. They remind us of the multiple connections between living things. The cryptic (hidden) species of coralline algae in the “bubble gum” mass on the surface of rock or coral may play important roles in the life of a reef and of kelp forests.

The findings of the researchers are summarized below.

The relationship between the coralline algae species and kelp appears to be complex and is one that needs to be understood. It seems that some species attract kelp and some benefit from or even require the seaweed’s presence.

I think it’s important that we learn more about coralline algae because they are so common and seem to play multiple roles in their environment. Learning about them is important not just to satisfy our curiosity. Given the environmental problems in the ocean today, we need to gather as much information as we can about the different life forms that make their home there.