Mushrooms beside the walking trail

Early autumn can be an enjoyable time of year where I live. The fall colours are often an attractive sight. While leaves are changing colour and falling to the ground, some flowers are still in bloom. A few species produce their first blossoms of the year. Autumn is the time when I see the greatest number of mushrooms, which often break through the soil and grass in unexpected places.

Early fall is also time for the last harvest of the year. Edible chestnuts are dropped from trees, rose hips are available, and some blackberries can still be picked. The season can be a lovely time to take photographs. In this post, I share photos from a recent nature walk along and near a walking trail in my neighbourhood.

I travel along the walking trail almost every day.  The trail consists of a wide path bordered by trees, shrubs, and a swathe of grass. It enables people to walk and cycle to places such as schools, shopping centres, and parks in an interesting environment away from traffic. It also enables people to study nature. Both cultivated and wild plants can be seen along the path’s borders as well as lichens, fungi, birds, squirrels, occasionally other mammals, and an assortment of invertebrates. It’s a popular place.

The first photo in this post was photographed on the grass beside the trail. The red leaf on top of a mushroom was positioned naturally (as far as I  know). I didn’t put it there, but I thought its colour made a lovely contrast with that of the mushroom. Though some of the fallen leaves in my area are a rather unattractive buff colour, others have beautiful hues.

Part of the walking and cycling trail in early October

The trail is ultimately bordered by a fence behind people’s back gardens. Garden trees and shrubs often overhang the fence. They can be an interesting sight when they are in bloom or have produced fruits. I value wild and cultivated plants equally when I’m walking in a residential area.

The bench in the photo above has a plaque honouring someone who has died. The yellow flowers have been placed on the bench in memory of the loved one. Flowers usually fill the soil around the bench. Someone removes them when they die and replaces them with new ones.

The Potentilla above was planted near a trail entrance. It reminds me of one that grew in my family’s garden in my childhood. That plant had yellow flowers, too, but some Pontentilla shrubs have orange, pink, or red flowers. Though the genus name alone is often used to refer to the plants, hundreds of species of Potentilla exist.

Like roses, Potentilla plants belong to the family Rosaceae. They are sometimes known a cinquefoils due to the presence of five leaflets in the compound leaf. Some plants have a different number of leaflets in their leaves, however.

I saw another member of the rose family on my recent walk. The rose and rose hips shown below were growing beside a short branch from the main trail that goes to an elementary school. I was impressed to see a few flowers in good condition beside the hips. The bright pink colour of the blooms was a cheerful sight. 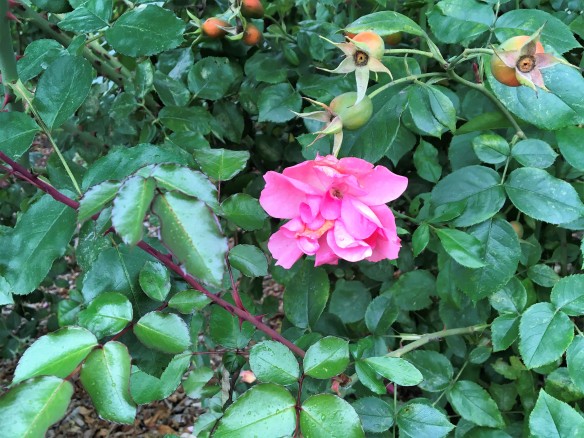 An unusual tree has been planted in front of the elementary school, or at least it’s unusual based on the trees that I’ve noticed in my area. It’s a sweetgum tree, or Liquidambar styraciflura. The leaves are reminiscent of maple ones with respect to both shape and colour. The fruits are very different from maple ones, however, and the tree belongs to a different family.

The sweetgum tree is native to eastern North America and Mexico. It gets its name from the resinous sap that it releases from its bark when it’s cut. The sap is sometimes referred to as liquid amber. The similar genus name of the plant is spelled slightly differently.

The leaves of sweetgum trees turn a beautiful red colour in the fall. The flowers are small and yellow-green. They’re borne in a cluster and appear in late spring. The fruits have a spiky and lumpy surface and are known as gum balls. They are green at first and later turn dark brown. The fruits can cause a problem if lots of them fall on a place where people walk.

The glossy English holly leaves and their red berries are always a cheerful sight. It’s hard not to think of Christmas when I see the berries , especially in the fall. Unfortunately, the plant can be invasive in my part of the world. It’s spreading noticeably beside one part of the trail. English ivy is also present and spreading in some sections of the trail. I think that both plants are attractive. Sadly, ivy grows even more vigorously than holly here. Ivy leaves can be seen behind the holly ones in the photo below. 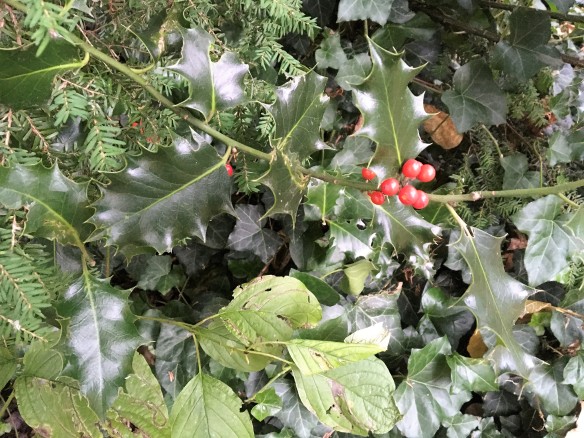 Autumn is the time of year when I see the greatest number of fungi. It always amazes me to think of the busy but unseen activity of the hyphae below the surface of the soil. Hyphae are the thread-like structures the form the body or mycelium of a fungus. They release digestive enzymes into a food source and absorb the nutrients that are produced.

Mushrooms are the reproductive structures of a fungus, though not all fungi produce them. Their appearance is often a surprise in my locality. A walk along the trail in October can reveal lots of mushrooms if someone explores the grass beside the path. The one below has gills under its caps. The gills produce and release the spores. 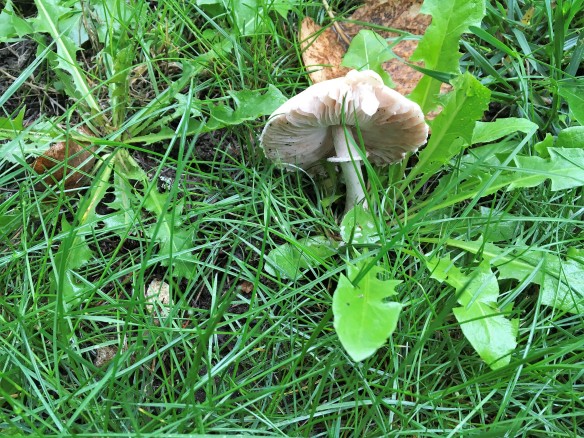 Tree stumps are frequently interesting because of the items that grow on them. I often find bracket fungi attached to them. These have pores for spore release instead of gills. They are also known as shelf fungi and as polypores. The hyphae of the fungus below are located inside the stump. 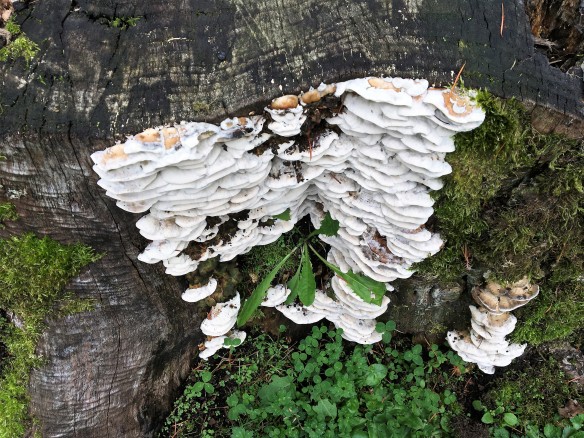 Most dandelion flowers appear in spring and early summer, but some plants bloom in the fall, like the one below. They are often considered to be a weed, especially when they grow where they’re not wanted. I like the plants, though. The bright yellow colour of their flowers is a cheerful sight. The name dandelion comes from “dente de lion”,  a French phrase meaning lion’s tooth. The name probably refers to the jagged edge of the leaves.

Dandelion are edible. The roots are sometimes roasted to make coffee and the leaves are used as salad greens. It’s very important to be careful if you decide to forage for food. The correct identification of a plant is vital. Not all plants with yellow, dandelion-like flowers are actually dandelions. In addition, the plants that are collected shouldn’t decimate the local population and should be collected in an area free of herbicides and pollution.

The gorgeous fuchsia flowers shown below were growing in a garden beside a sidewalk near a trail entrance.  I couldn’t resist photographing them. I think the colourful, two-toned flowers are beautiful. The home owner had positioned the plant so that they saw lots of flowers from their vantage point and so did people walking along the sidewalk. Bees were still active in early October and were exploring the flowers to see what they had to offer.

Most species of Fuchsia are native to South America and most grow as shrubs. They’re named after a sixteenth-century German botanist and physician called Leonhard (or Leonhart) Fuchs. The purple-red colour known as fuchsia is also named after the botanist. In the flowers below, the sepals are red and the petals are purple. The unopened flowers have a tear-drop shape.

Fuchsias beside a sidewalk

There are many other sights to see along and near the trail. Even in winter, it can be an enjoyable area to explore. The trail continues beyond my neighbourhood. The other sections of the trail have slightly different features and are also interesting to investigate. New plants and animals sometimes appear. Several years ago, I saw a coyote at an entrance to the trail. I nearly always discover something new during my walks along the local trail system.

3 thoughts on “Flowers, Fruits, and Mushrooms: A Nature Walk in October”