One very enjoyable aspect of living in my suburban neighbourhood is that people and the city are generous with their plant displays. People’s front gardens, landscaped areas and plant containers by townhouses, apartments, and shopping centres, and the parks and golf course in the area display some lovely flowering plants where the public can admire them. I’ve chosen five of these plants to discuss in this post: foxgloves, irises, mountain bluets, bleeding hearts, and palm trees. I always have a camera of some kind with me when I leave my home, so I was able to photograph the flowers during my walks.

I’ve loved foxgloves since I was a child. Their large and impressive spires of flowers are hard to ignore. The scientific name of the common foxglove is Digitalis purpurea. It often has beautiful purple or pink flowers with a spotted interior but may have yellow or white blossoms. The flowers are pollinated by bees. Watching a bee explore the interior of one of the tubular flowers in a spire is always interesting.

The plant contains a chemical called digitalis and is poisonous. Digitalis is used in medicinal doses as a heart medicine and is an important chemical. Eating digitalis and related substances in foxgloves is dangerous, however. All parts of the plant are toxic. The plant can cause an irregular or slow heartbeat, low blood pressure, and other potentially dangerous symptoms in humans and animals. Medical attention is essential. Despite its danger, the foxglove is a beautiful sight when it’s in bloom. 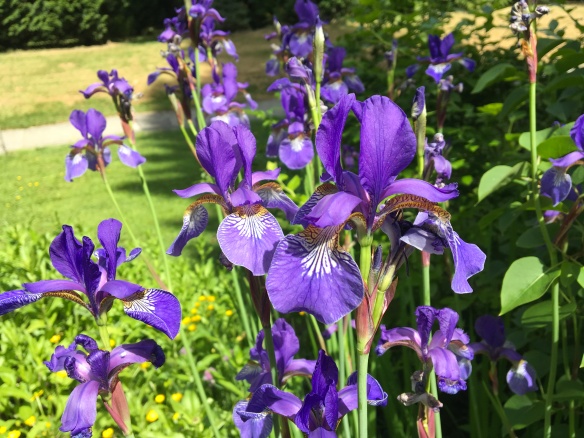 Irises are also beautiful flowers and come in a wide range of colours, except for bright red. The blue flowers are my favourite version, at least based on the varieties that I’ve seen so far. I photographed the flowers above between a walking path and a townhouse complex.

An iris flower appears to have six petals. The outer three are sepals, however. The inner petals are upright and are referred to as standards. The outer sepals generally droop gracefully and are known as falls. The photo display of different irises in garden catalogues is often gorgeous, especially when the standards and falls have different colours.

Irises are poisonous, but not to the same extent as foxgloves. It should be noted that individual sensitivity to a particular toxin can vary, however. The plant may be more harmful for some individuals than others. Ingestion of iris can cause stomach upset, nausea, vomiting, and diarrhea.

Centaurea montana has a variety of common names, including mountain bluet, perennial bachelor’s button, and perennial cornflower. It’s a common garden plant in the Greater Vancouver area and also grows well as a garden escapee. I often see it in disturbed and open areas beside walking trails. I first identified it in its wild form, not its cultivated one.

The centre of the flower is reddish purple and the highly-divided “petals” are blue. The plant belongs to the Asteraceae family. What appears to be a flower is actually an inflorescence with many smaller florets (the flowers of an inflorescence). The red centre is composed of disk florets and the blue extensions are ray florets.

In some areas of British Columbia, mountain bluet is considered to be an invasive plant. Self-pollination and growth from underground rhizomes enables the plant to spread easily. The plant is found in the northwestern section of the province, the central interior, and the lower mainland region in the southwestern part of British Columbia.

I first became interested in bleeding heart as a wildflower, (Dicentra formosoa, or the Pacific bleeding heart), which has completely pink flowers. Then I discovered that a lovely cultivated form was growing by an apartment complex near by home. The cultivated flowers are shown in the photo above.

The plant in the photo is Lamprocapnos spectabalis. It’s known as the bleeding heart, the common bleeding heart, and the Asian bleeding heart. Its flowers are pink and white. It’s a much larger plant than the wild species. I was impressed by how long the flowers lasted. The flowers were still present and in great condition when I visited them in June. I’ve chosen to show a photo of the plant that I took in spring because I prefer it to my later ones.

Both the wild and the cultivated species of the plant belong to the poppy family, or the Papaveraceae. They have highly divided leaves and hanging, heart-shaped flowers with an extension at their tip. The extension looks like a drop of liquid, giving the plant its common name. Each flower has four petals. In the cultivated plant, the outer two petals are pink and curl outwards at their tip. The inner pair are white.

Bleeding hearts are yet another plant that’s attractive and toxic.  Some people develop a skin irritation from touching the plant. Reports of the plant’s toxicity range from ones saying that it’s mildly poisonous to ones saying that it’s dangerous (especially for dogs). The effects may depend on the amount that’s eaten, but it’s important not to take chances. Medical or veterinary attention should be obtained if any amount of the plant is eaten.

A palm tree in flower in a garden

It may seem odd to some people, but palm trees grow in the Greater Vancouver area. We have relatively warm winters compared to the rest of Canada. Nevertheless, we often get a few days of snow. Most palm trees in the area are windmill palms, or Trachycarpus fortunei. The trees in my photos probably belong to this species. The species is native to areas with climates colder than most palms can endure, including China, Northern India, and Burma. The windmill palm can survive periods of below-freezing temperatures, as long as the conditions don’t become too severe.

The photo above was taken not far from my home. The tree was growing near a garden fence. The photo below was taken at English Bay Beach in Vancouver. The beach has a small but attractive collection of the trees.

A palm tree by English Bay Beach (The A-maze-ing Laughter sculpture can be seen on the left in the background.)

The palm tree flowers in spring where I live. By the middle of June, the flowers are mostly past their prime and the fruits have started to develop. The tree is interesting to see all year, however. It has distinctive features compared to native plants. I always notice the presence of palm trees, even though I’ve lived in the Greater Vancouver region for many years. Like other cultivated plants, they are a lovely sight on a walk.