The Nike statue in Vancouver

Nike was the Ancient Greek goddess of victory. “Victory” was an important idea to the Ancient Greeks and still is to many people. The battle that’s won may not be a physical one. Small, everyday victories over challenges in our lives are often worth celebrating. Nike is commemorated in Vancouver by a modernistic statue located near the waterfront. It’s worth pausing to look at the statue during the short walk from the downtown area to the water. The goddess and her depiction have an interesting history.

An Ancient Greek Goddess of Victory

In Ancient Greek mythology, Nike was the daughter of the Titan goddess Styx and the Titan god Pallas. Styx presided over the River Styx, which ran between Earth and the Underworld. Pallas was the god of warcraft. The Titans were the deities that came before the Olympians and were the first rulers of the universe.

There were twelve Olympians. They belonged to the Titan line (or at least were descendants of the Titans) but rebelled against their relatives. Their name came from Mount Olympus, which was their home. Styx supported an Olympian named Zeus. She took her four daughters, including Nike, to help Zeus in his eventually successful fight against the Titans. Nike became Zeus’s charioteer.

Nike was a winged goddess who was associated with victory in battle and in peaceful competitions.  In art, she is sometimes displayed with her wings outspread over the victor in a competition. She sometimes carries a wreath or a sash to place on the victor and/or a lyre to play a song of celebration. In some illustrations, she carries a palm branch to place over the winner. 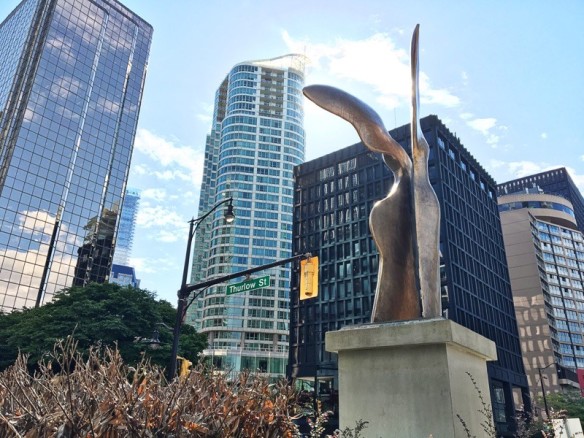 Another view of the Nike statue

The Nike statue in Vancouver was created by Pavlos Angelos Kougioumtzis. It was given to the city of Vancouver as a gift in appreciation for holding the 2010 Winter Olympic and Paralympic Games. Since 1996, the municipality of Ancient Olympia in Greece has sent a version of the statue to the current host of the Winter and Summer Olympic Games. The Vancouver version is located on the corner of Thurlow and Cordova Streets near the waterfront in an area known as Coal Harbour.

The statue has been placed on a median or island in the middle of the road. People who want the best view of Nike have to pause on the median as they cross the road. There’s a “Walk” light at the intersection, but someone pausing at the statue has to wait for someone else to trigger the light before they can complete their trip across the road.

The bronze statue on the median is attractive. It doesn’t resemble a human, though parts of the human form are represented in the statue. It has graceful curves and two sections, each with a wing. It arrived in the city in 2010 but was kept in storage for four years. This seems like a sad and ungrateful thing to do to a gift. The situation arose because of the disagreement about the statue’s final location. The intersection of Thurlow and Cordova was finally chosen as its home. After the decision was made, it took time for the podium to be designed and constructed. Nike was finally placed on the podium in 2014, the year of the next Olympic Games. 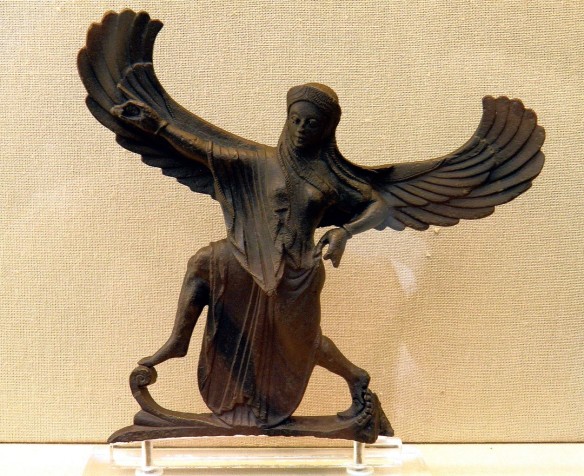 The statue is located just a block away from the Jack Poole Plaza, which is located by the water. It’s worth travelling just a bit further after viewing Nike. The plaza and its surroundings are interesting to explore.

The plaza has three connections to the Olympics. One of these is that it contains the giant Olympic Cauldron. The cauldron is lit whenever a special occasion occurs, such as Canada Day (July 1st). It was created for the 2010 Olympics. The torches of the cauldron have a sparkling surface that imitates the sparkle of ice. 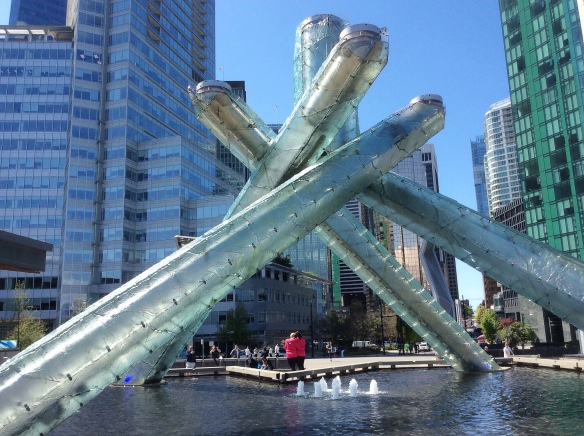 The Olympic Cauldron against a backdrop of downtown Vancouver

Another attraction on the plaza is the giant Digital Orca sculpture. The orca, or killer whale, is made of blocks. It may not be recognizable as a whale when someone is very close. As they move away with an eye on the sculpture, however, the jumble of blocks appears to magically form the body of a leaping orca. The sculpture is shown at the top of this page.

The plaza is named after Jack Poole, a businessman who led the committee that worked to bring the Olympic Games to Vancouver. Unfortunately, he died of pancreatic cancer  just hours after the Olympic Flame was lit in Ancient Olympia at the beginning of the torch relay. 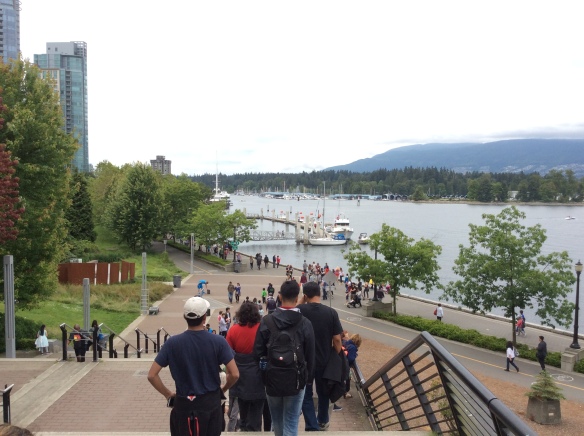 Walking down to the greenway (The path can also be accessed without going down stairs.)

The Seaside Greenway can be accessed from Jack Poole Plaza and from many other sites. The greenway is a pedestrian, cycle, and wheelchair path that travels beside the water and offers lovely views. Its full length is 28 km. It starts at Canada place, joins the seawall path in Stanley Park, and continues onwards. An ambitious person could travel the whole distance, but it isn’t necessary to do this. The path can be joined and left in many places. It’s one of my favourite routes in Vancouver.

The five sails at Canada Place

It’s easy to navigate in Vancouver if the mountains can be seen because they are located to the north. If a person travels just a short distance to the east of Jack Poole Plaza, they’ll reach Canada Place, which has attractions of its own. Two of these are a large pier containing a promenade and five giant sails that are illuminated at night. In summer, cruise ships to Alaska can be seen at the pier.

If a person travels a little further to the east, they’ll arrive at Gastown, a historic area of the city. The cobbled streets, the famous steam clock, and the statue of Gassy Jack are just some of the attractions in the area. Gassy Jack’s real name was John Deighton. He lived from 1830 to 1875 and was the founder of Gastown.

Whenever I visit Nike, I can’t resist walking just a bit further to reach the plaza and the water. It’s always enjoyable to look at the cauldron, the orca, Burrard Inlet, and the activity on the water. The downtown area of Vancouver has much to offer visitors.

1 thought on “Nike: A Vancouver Statue and an Ancient Greek Goddess”