The Pacific dogwood (Cornus nuttallii) is a small tree that produces large and showy blooms in the spring. It’s always lovely to see that they have emerged. The flowers and the tree that bears them were adopted as British Columbia’s official floral emblem in 1956. It’s illegal to pick the flowers for this reason. As described below, although in everyday speech we talk about the impressive white “flower” of dogwood, it’s scientifically inaccurate to use this word for the whole structure.

A cultivated dogwood tree in bloom near my home

The Flowers of Pacific Dogwood

Dogwoods belong to the genus Cornus and the family Cornaceae. The Pacific dogwood grows in both a wild and a cultivated form. The bright blooms are attractive. Seeing them adds to the joy of spring.  It actually makes sense to refer to the dogwood as BC’s official floral emblem instead of the province’s official flower, however. Biologically, the large “petals” are bracts, or specialized leaves. The flowers are the small structures in the centre of a bloom. They’re shown in a close-up view in the photo below.

The bracts are mostly white but sometimes have a green or pink tinge. In some species or varieties of dogwood, they are completely pink. They often have lines of a darker colour extending from their base to their tip. Since multiple flowers are surrounded by the bracts, the flower head (the central bump bearing the flowers) is technically known as an inflorescence. Each inflorescence contains thirty to forty flowers and is surrounded by four to six bracts.

The true flowers of the Pacific dogwood are located in the centre of the surrounding bracts. (Photo by Walter Siegmund, CC BY-SA 3.0 license)

Distribution of the Plant

The Pacific dogwood grows on the southern coast of the province and on Vancouver Island. The island is separated from the mainland by the Strait of Georgia. The plant also grows down the western coast of the United States as far as southern California. In addition, the tree can be found away from the coast in central Idaho.

An ornamental dogwood tree viewed from below (Photo by Linda Crampton)

Features of the Tree

The species is a deciduous tree of low to medium height. The maximum height may be around 15 to 20 metres. The reported value varies widely, however. The leaves are oval and have a pointed tip. The veins that leave the midrib of the leaf are parallel to each other and curve gracefully towards the tip. The leaves are attached to the stem in an opposite arrangement. In the fall, they turn an attractive yellow, orange, or red colour. The tree has grey bark.

The dogwood blooms in spring (April, May, and June where I live) and sometimes blooms again in the fall. Each flower in the inflorescence has both a pistil and stamens and is pollinated by insects. The flowers produce dark red berry-like structures, which are technically known as drupes. They are edible, but they don’t taste very good because they’re bitter.

As always, if you’re tempted to forage for food such as drupes in the wild, make sure that you are absolutely certain of a plant’s identity. The fruits of some plant species are poisonous. Even plant parts that are considered to be edible can produce unpleasant effects in some individuals, especially when they’re eaten in a large quantity.

The wild plant has had many traditional uses and is important in nature today. The wood is hard and dense. It has been used to make a variety of products at various points in time. These products include the heads of golf clubs, mallet handles, bows and arrows, knitting needles, cabinets, and even piano keys. Birds and small mammals such as deer mice (and in some parts of the plant’s distribution, the red tree vole) feed on the fruit. Deer and elk feed on the sprouts. In addition, the bark has been used to create a tanning agent and dyes. Tanning is the process in which animal skin is converted to leather.

The Straits Salish made a tanning agent from the bark. The Thompson people made dyes – deep brown from the bark, black when mixed with grand fir, and red from the roots. (A quote from the Tree Book from the Government of British Columbia) 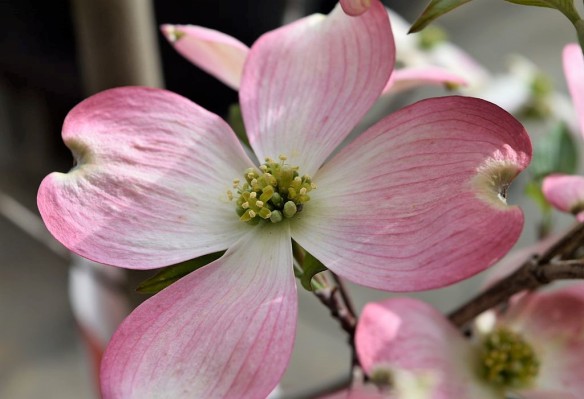 A pink dogwood flower of an unknown species or variety (Photo by Sosanna, CC BY-SA 4.0 license)

Derivation of the Common Name

According to the BC Government, the word “dog” in dogwood may have come from “dag”, the Sanscrit word for skewer. Though it makes sense that the hard wood could have been used to make skewers, it  may not be immediately obvious why a Sanscrit word should have been used for a North American plant. The dogwood genus has links to Europe and Asia, however, as described below.

A related suggestion made by other investigators is that the name arose from the Old English term dagwood, which referred to wood that was hard enough to make daggers, arrows, and skewers. Some investigators say that the origin of the name has been lost in time and that we can’t be sure of its origin.

Derivation of the Genus Name

The Latin word cornus was used to refer to cornel wood, or the cornelian cherry. The tree (Cornus mas) is a dogwood and not a cherry tree, despite its common name. It’s native to southern Europe and southwestern Asia. Though it belongs to the same genus as the Pacific dogwood, some of its features are quite different.

The cornelian cherry has yellowish bracts that are aren’t much larger than the flowers, which are also yellow. In addition, the red drupes are apparently more palatable than those of the Pacific dogwood. They are used to make jam and a sauce. They are also used to make alcoholic drinks and are eaten in a dried form as a snack. The leaves of the cornelian cherry have the typical shape and vein pattern of dogwoods.

Fruit and leaves of a cornelian cherry (Photo by CarTick at English Wikipedia, CC BY-SA 3.0 license)

The species name of the Pacific dogwood is named is derived from the name of Thomas Nuttall (1798-1859).  Nuttall was an English naturalist, botanist, and ornithologist. His first career was as an apprentice printer, but he soon moved on to other endeavours. He joined an expedition to the United States with botanist John Bradbury. The pair collected and studied plants, which they took back to the United Kingdom.

Nuttall later returned to America and made other collecting trips. In 1822, he was hired as a botanist by Harvard University. Nuttall publicized his discoveries in books. In 1832, his famous Manual of the Ornithology of the United States and of Canada was published.

Though Nuttall lacked training in science from an academic institution, he received individual training from botanists and was respected for his extensive knowledge and investigations. 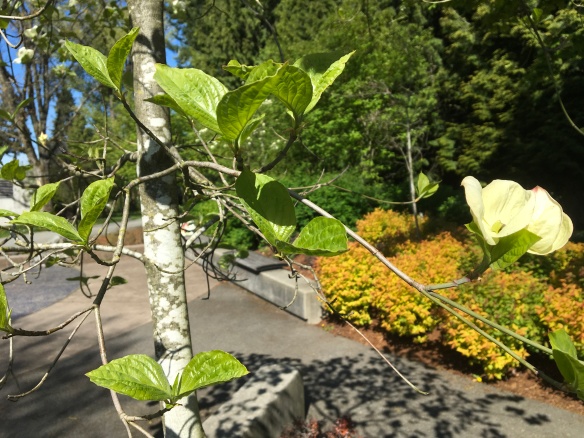 Unfortunately, the Pacific dogwood population is under some stress. It’s susceptible to a fungal infection known as dogwood arachnose. The organism responsible for the disease is called Discula destructiva. This fungus is not native to the area where the dogwood grows but was introduced  from Asia in 1978. It affects wild dogwoods as well as ornamental ones and infects other species besides Cornus nuttallii.

Like other fungi, the body of Discula destructiva is composed of branching, thread-like structures called hyphae. The hyphae of a single fungus are collectively known as a mycelium. They release digestive enzymes into their environment to digest their food source. The nutrients are then absorbed by the hyphae. The fungus reproduces by releasing spores from a fruiting body.

The leaves of infected dogwood plants develop brown blotches with red or purple margins. Cankers (areas of tissue destruction) may develop on stems and branches. Multiple shoots may appear around the canker. These produce localized shade and humidity, which promote the growth of the parasite. The fungus overwinters within the plant.

Management of the Fungus

The University of Massachusetts recommends the following steps in order to manage the fungus.

The fungal infection may not be fatal for the plant, though it creates unsightly effects. It does sometimes kill its host, however.

Heavily infected young trees may be killed but, if conditions become less favourable for disease development in subsequent seasons, branch and tree cankers may be contained and the tree recovers. (A quote from CABI, or the Center for Agriculture and Bioscience International)

The dogwoods are an interesting group of plants. It’s enjoyable to see them in the wild and in landscaped areas. I hope that the activity of the fungus can be suppressed and that the trees exist for a long time to come.