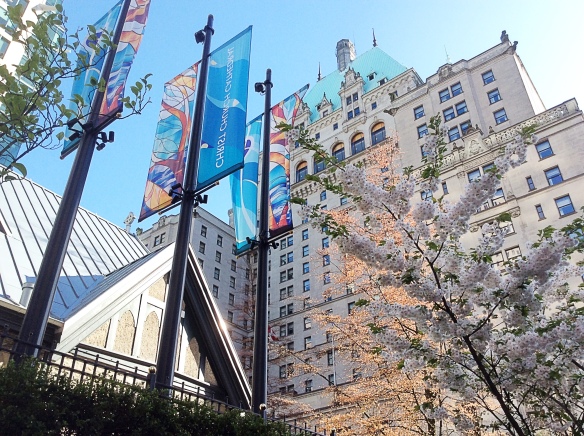 Christ Church Cathedral is a major historical landmark in downtown Vancouver. The cathedral and its surroundings are lovely places to explore. The exterior of the church isn’t as architecturally imposing as the nearby Holy Rosary Cathedral, but the interior is beautiful and contains an impressive pipe organ. The exterior of the building and the small park next to the church are also interesting to see and photograph, especially after the recent renovation of the cathedral and the installation of a bell tower.

I took the exterior photos in this post, but I chose interior ones from other photographers. Their photos of the inside of the cathedral are much better than mine and do the cathedral better justice. I’ll try to get interior photos of a reasonable quality soon. The art and objects inside the church deserve a post of their own.

The cathedral is open and welcomes everyone.

The cathedral is located at the corner of Burrard Street and West Georgia Street, which puts it in the middle of today’s downtown area. It’s part of the Anglican Church of Canada. Like the Episcopal Church in the United States, the Anglican Church belongs to the worldwide Anglican Communion.

The cathedral is often open to visitors and displays an open door and a welcome message at that time, as shown in the photo above. The open hours are generally between 10 a.m. and 4 p.m. Exceptions to these hours are the times when services are held. Of course, visitors are welcome to attend a service. The church welcomes everyone, including LGBTQ people. The main entrance is located on Burrard Street very near its intersection with West Georgia.

A view of the cathedral from Burrard Street

A Brief History of the Cathedral

The idea to build the cathedral was born in 1888. At that time Vancouver was a logging town and the church site was in a residential area. The town already had a church—St. James Anglican—but this was considered to be a “high” Anglican Church. Even today, St. James advertises itself as an Anglo-Catholic parish. According to Christ Church Cathedral’s website, people wanted a new church that was “more Protestant and evangelical” than St. James.

The land for the new church was purchased from the CPR, or the Canadian Pacific Railway. The Fairmont Hotel Vancouver is located next to the hotel but on the opposite side of West Georgia. It was originally a CPR hotel.

The first service in the church was held on October 6, 1889, though the building was only partially complete at that time. It was officially finished in 1895. In 1976, the cathedral was designated a Heritage Building, which means that only limited changes can be made to it.

The small park known as Cathedral Place, the bell tower of the cathedral, and the Fairmont Hotel Vancouver

The cathedral has undergone several renovations over time. A long and very significant one was finished in 2016.  The roof was leaking and badly needed to be repaired. In addition to providing a new roof made of zinc and other improvements, the renovation created a bell tower. Until that point, the cathedral had no bells. Holy Rosary Cathedral had (and has) a lovely set. The powers-that-be didn’t want the sound of any more ringing bells to be heard in the city. This problem has been solved, however. The Christ Church Cathedral bells ring at specific times of the day. The current schedule can be found by clicking on the relevant link in the “References and Resources” section below.

The four bronze bells are located in a spire with stained glass windows. They were custom-built for the cathedral by a company in France. The bells are rung electronically. Unlike the case for the Holy Rosary Cathedral, no bell ringers are required.

The interior of the cathedral as it existed in 2012. (Photo by Colin Knowles, CC BY 2.0 license)

The interior of the cathedral has a warm appearance, partly due to the choice of yellow, orange, and brown colours and the gentle lighting. The religious aspects of the interior would likely be very significant for some people. I think at least some of the contents of the cathedral could also be appreciated by people of different faiths or of none at all. There is a lot to examine, including stained glass windows, memorial plaques, the beautiful pipe organ, and the architecture.

Chairs are provided for worshipers instead of pews. This enables the area to be cleared so that the portable labyrinth can be placed on the floor. As the cathedral website says, the labyrinth is intended for “walking, reflection, prayer and personal discovery”.

A relatively new appearance is the Celtic Cross located on a rock  beside the cathedral. The art was created by Samuel Bates. His artist’s statement is published on the cathedral’s website. The inspiration for his work is interesting to read. It’s linked to Christianity, as would be expected.

According to the artist, the symbols for the gospels in the cross come from Celtic Christianity, though he “has created his own vision of them”. John is represented by the eagle, Luke by the winged ox, Mark by the winged lion, and Matthew by the angel (or a winged man in the Celtic tradition). The wings symbolize transcendence. The triskele or three-armed spiral in the centre of the rock represents the Trinity. The other swirls in the work represent the Creator sharing its existence and then existence returning to the Creator. 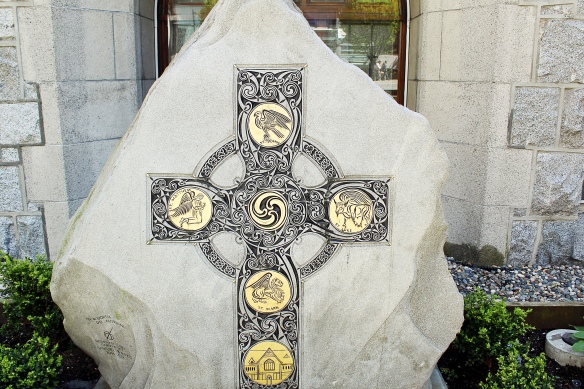 The Celtic Cross by Samuel Bates

I enjoy looking at the architecture and art of the cathedral and thinking about symbolism and meanings, even though I am far from being a traditional Christian. I find the intersection of mythology and reality (or possible reality) fascinating and sometimes meaningful as well. Even if these topics are of no interest to you, the cathedral provides some great photo opportunities. I think it’s worth a visit if you ever have the opportunity.