Gastown is a unique and interesting area in downtown Vancouver. It’s a historically important part of the city as well as a tourist attraction. It’s the oldest neighbourhood in Vancouver and the site where the core area of the city was created. Gastown has modern street decorations created in a vintage style and is known for its cobbled streets, interesting shops and eateries, photogenic street lamps, a steam clock, and the statue of Gassy Jack, or John Deighton. Unless otherwise stated, I took the photos in this post. I live near Vancouver and often visit Gastown.

John Deighton (1830-1875) is traditionally said to have founded Gastown in 1867. He was known as “gassy” because he was very talkative. He was born in England and is often described as an adventurer. He participated in a gold rush (without much success) and worked as a steamboat pilot.

When Deighton discovered a suitable patch of land beside Burrard Inlet, one of his first acts was to build a saloon with the aid of workers at the nearby Hastings Sawmill. He told the workers that he would give them all the whisky they could drink if they helped him create the saloon. The building was erected within twenty-four hours.

The sawmill workers and sailors visiting the area were Deighton’s main customers. New buildings were erected around his Globe Saloon and a community soon developed in the area. The community was at first known as Gastown after John Deighton’s love of storytelling. In 1870, government representatives explored the area and renamed it Granville. The name honoured Lord Granville, the Secretary of State for the Colonies. British Columbia didn’t become part of Canada until July 20th, 1871.

A lovely view of a Gastown lamp (Photo by Xicotencatl, CC BY-SA 4.0 license)

Granville was eventually renamed Vancouver and officially became a city on April 6th, 1886.  Captain George Vancouver was a member of the Royal Navy and is famous for charting the coast of the Pacific Northwest region of North America, which includes British Columbia.

Very soon after its official creation, the new city faced a disaster. A major fire occurred in Vancouver on June 13th, 1886. It quickly destroyed the wooden buildings that formed most of the city. These buildings included John Deighton’s saloon. Sadly, it also destroyed human lives. The fire was such an important event that it’s referred to as the Great Fire. The fire was spread by wind from a small fire that was deliberately lit to clear brush.

Vancouver was quickly rebuilt after the fire and continued to grow. The buildings in Gastown are old, but due to the fire they don’t represent Deighton’s community. They do represent the location of the community that stemmed from his popular tavern, though. 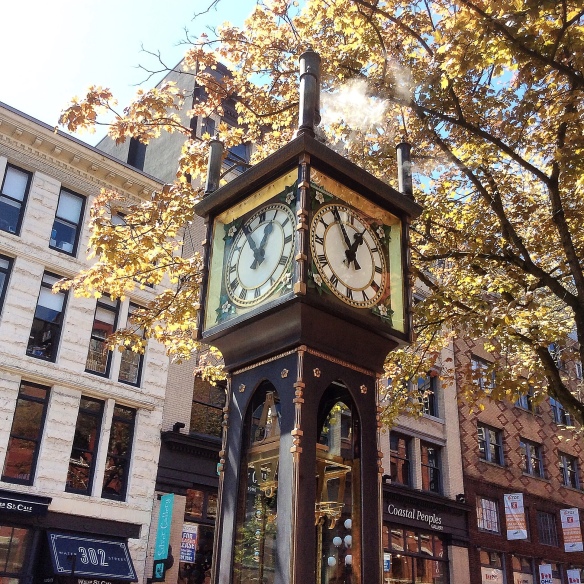 The steam clock in Gastown

Today many of the buildings in the Gastown area have been refurbished, though the designers have been careful to maintain a particular style while doing so. The area is known for its boutiques, souvenir stores, art galleries, coffee shops, restaurants, music venues, and technology firms as well as its outdoor attractions. It’s an enjoyable place to explore and photograph.

A view of the internal mechanism of the steam clock

The Gastown “steam” clock is actually powered by electricity, although it includes a small steam engine as part of its mechanism. The steam comes from an underground pipe. Moving weights are also part of the clock’s mechanism and can be seen in the photo above. The clock was built as a tourist attraction and has been very successful in meeting that goal. I often find it hard to photograph the clock because there’s a group of people around it.

The clock was built by Raymond Saunders in 1977. It releases puffs of steam every quarter of an hour and at the same time produces a sound from its whistles. It also marks each hour with the correct number of toots from a whistle. You can see the steam in my first photo of the clock.

The bronze statue of Gassy Jack was created by Vern Simpson in 1970. The statue is standing on a whisky barrel. It’s placed at a relatively open area where several main roads intersect (Water, Powell, Alexander, and Carrall Streets). The area is known as Maple Tree Square and is believed to be the approximate location where the Globe Saloon was built.

The photo below provides a wonderful look at history. It shows Maple Tree Square in 1886 just before the Great Fire. The maple tree was a popular gathering place for local people (or at least for the men in the community, as the photo suggests). Unfortunately, the tree no longer exists. Maple trees can live for a hundred years or more, depending on the species.

The Gastown area was in a bad state in the 1970s and was scheduled for demolition. History fans and local residents objected and the area was revitalized. It’s very popular today. Visitors to Vancouver should be aware that if they walk beyond Maple Tree Square, they may discover an area that hasn’t been revitalized and is home to people who need help in one form or another. The area is known as the Downtown Eastside neighbourhood. Government representatives and social agencies are helping people in the neighbourhood, but the problems there are proving difficult to solve.

It’s a shame that businesses and people in Gastown are doing well and just a short distance away they aren’t. The situation is sad, but it certainly doesn’t mean that tourists and residents should avoid Gastown. The area is a great place for visitors, including Maple Tree Square. Visitors may not want to walk much further to the east after they’ve explored the square and its immediate vicinity, though.

It’s perfectly feasible for someone with normal mobility to walk through the downtown section of Vancouver to Gastown. The area is located near the Waterfront Skytrain Station. If a person turns to the left as they leave the main station entrance, they’ll soon reach Gastown. I always enjoy a walk through the area. It’s well worth visiting.