I love the beautiful splash of colour that crocuses create in early spring. It’s wonderful to see such pretty flowers before most of the other plants in my part of the world have blossomed. The crocuses are a sign that the beginning of spring has arrived and that the pace of nature’s wakening is about to quicken.

I don’t have any crocuses in my garden at the moment, but I’m able to enjoy the sight of the flowers with little effort. They grow beside a trail very close to my home. Many of the flowers there are likely garden escapees, although I suspect that some of them may have been deliberately planted. They bloom every March and are spreading.

Some crocuses have rich colours.

Common or English daisies are beginning to bloom where I live and are a pleasant sight. The more vibrant colour of the crocuses is very much appreciated after I’ve been surrounded by the relatively drab plants of winter, though. The flowers close on dull days, but on sunny ones they open and reveal their beautiful colours and attractive stripes.

Crocus flowers close when the outer surface of their petals grows relatively rapidly, causing the petals to bow outwards. They open when the inner surface grows rapidly, causing the petals to bow inwards. There are several theories about why they need to do this. One is that protecting the pollen on dark days stops it from becoming wet and heavy when it rains. The heavier pollen might be harder for insects to transport. Pollen must be transported from one flower to another in order for reproduction to occur and seeds to be produced. Crocuses are pollinated by bees, beetles, and moths.

Many crocuses don’t smell fragrant (as least to humans), but another theory may explain why some flowers close in the dark or in dull light. This theory says that the action preserves odoriferous molecules that attract insects. The action saves the molecules for the time when most insects are around and prevents the plant from having to make them again. 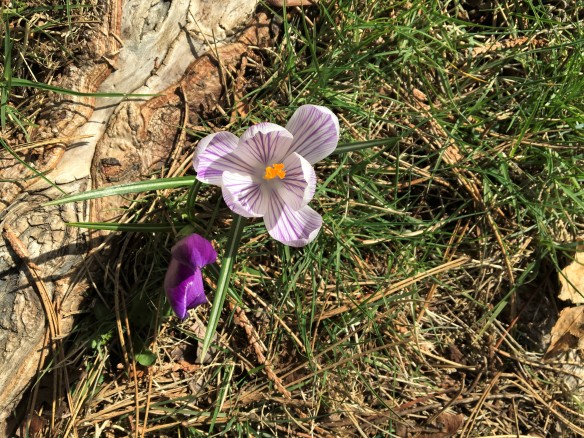 The different colours and patterns of crocus flowers are attractive.

Crocus plants belong to the genus Crocus, which is part of the iris family,  or the Iridaceae. The genus contains multiple species that flower at various times of the year. Crocuses are native to Europe and Asia. They have been introduced to many places around the world, including North America.

The plants are perennials that grow from an underground corm. A corm is a storage organ. A bulb contains layers of tissue, but a corm appears to have a solid interior. One end of the crocus corm is rounded and the other is pointed. The corms are planted in the fall about three to four inches deep and two to four inches apart, generally with the pointed end up. They require well-drained soil.

If the flowers grow in a grassy area, the grass shouldn’t be mowed until the leaves have died. The leaves carry out photosynthesis and create food that is stored in the corm.

I love the colour contrast between crocus flowers and the leaf litter.

The crocus plants that people buy for their garden or for landscaping purposes are very often varieties of Crocus vernus, or the spring crocus. They are the most common type of the plant where I live. Other species that bloom in spring are also used in gardens. These include Crocus chrysanthus, or the snow crocus, which is liked for its yellow flowers.

Crocus flavus, which is commonly known as the yellow crocus or the Dutch yellow crocus, is also liked. The plant is popular for its brilliant orange-yellow flowers, which have a pleasant fragrance. Additional varieties of crocuses are available at garden stores. Some are multicoloured.

A lovely discovery on a walk

A crocus flower has six petals that are arranged in two whorls of three. The centre of the flower contains the female structure, or the pistil. The pistil has a tall style with a branched and feathery stigma at the top. The stigma is the part that traps pollen grains from another crocus. The three stamens are shorter and surround the pistil. Stamens have anthers or pollen sacs at the top. These are born on a stalk called the filament.

You’ll notice that all the flowers in my photos have long and narrow leaves with a grey or silvery stripe down the middle. This is a characteristic of the genus Crocus.

Two other plants known as crocuses have some interesting features, though one is potentially dangerous.  Crocus sativa produces the spice known as saffron. The spice consists of the dried stigmas of the flower. Obtaining enough stigmas to sell is a labour-intensive process. The spice is expensive but is highly valued in some cuisines.

Great care is needed when dealing with a plant known as the autumn crocus. The name might suggest that this is a garden crocus that blooms in the autumn instead of the spring, but that’s not the case. It does bloom in autumn, but it’s not a crocus, despite its common name. It’s very poisonous and can be deadly. It’s not a suitable plant for a place where young children or pets live or visit.

The scientific name of the plant is Colchicum autumnale. It’s sometimes referred to as “naked ladies” because when it flowers the leaves have disappeared. Another way to distinguish the plant from a true crocus is the fact that the flower has six stamens instead of three.

All parts of the plant are poisonous and affect multiple systems in the body. Ingesting any part of it can be fatal. In a tiny and carefully formulated amount prescribed by a doctor, however, a potentially dangerous chemical in the plant called colchicine is used as a medicine for gout. 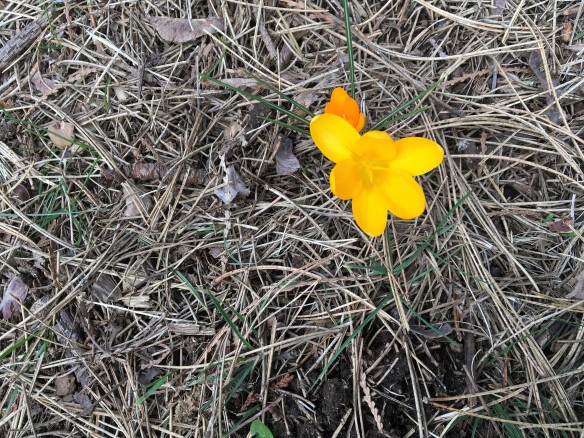 This is the only yellow crocus that I’ve seen beside the trail this year.

I would never grow autumn crocus because I have pets in my family. Though I do have some ornamental and food plants in my garden, most of the garden is covered by grass to accommodate my two dogs. It’s therefore very nice to see cultivated flowers in my neighbourhood.

Several landscaped areas that the public can explore are located quite close to my home. The spring crocuses are even closer. Some can be seen at the bottom of the road where I live. I’m glad that the plants put on such a lovely show in mid-March. The colourful display improves each year.

2 thoughts on “Beautiful Crocuses in March: Photos and Facts”