The Canadian poet Patrick Lane died on March 7th, 2019 in British Columbia. He was a renowned and award-winning writer who shared his knowledge and skills with students. His website contains four of his poems. My favourite one of the four is entitled “Kintsugi.” It’s an evocative and moving poem that seems especially poignant given the poet’s recent death.

Kintsugi is a Japanese art in which broken pottery is repaired by lacquer mixed with gold dust. Lane’s poem is about a damaged person approaching death instead of broken pottery. The link to kintsugi is obvious, however, and not just because of the poem’s title.

A modern bowl broken during the firing process and repaired by kintsugi (Photo by Ruthann Hurwitz, CC BY-SA 4.0 license)

A Brief Biography of Patrick Lane

Patrick Lane was born in 1939 in the city of Nelson, which is located in the southern interior region of the province. In his early life Lane worked in a sawmill, drove a truck, and provided first aid. He didn’t have an easy life at the time. Alcohol became a problem and stayed one until 2000. He had two failed marriages. His brother and his father both died in tragic circumstances.

Lane said that ever since childhood he had wanted to be an artist and never lost this desire, despite the problems in his life. The desire eventually expressed itself in poetry.  Lane began to write poems in his early twenties. He said that he started writing poems because he couldn’t afford to paint. He quickly became enamoured with writing.

Lane travelled widely and finally settled near the city of Victoria with his third wife, Lorna Crozier. Like Lane, she’s an award-winning poet. Lane won or was shortlisted for many literary awards during his life. In 1978, he won the Governor General’s Literary Award for poetry. His 2005 book about his problems with alcohol and his love of gardening (“There Is a Season”) received the Lieutenant Governor’s Award for Literary Excellence and the BC National Award for Canadian Non-Fiction.  In 2014, Lane was made an officer of the Order of Canada.

Lane wrote novels as well as poetry and taught writing at the University of Victoria. He was awarded several honorary doctorates. There are conflicting reports about the cause of his death. Some say that he died after a long illness and others say that he died of a heart attack. One or both of these reasons may be the case. 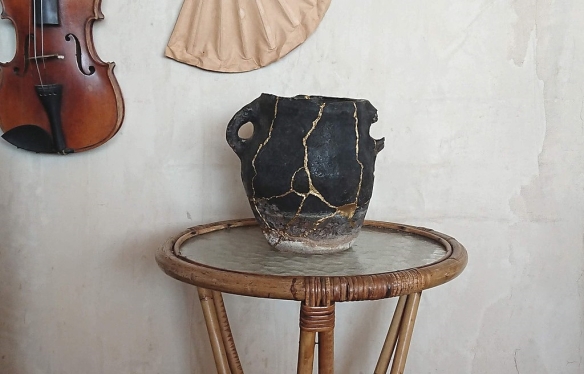 The Art of Kintsugi

Kintsugi (golden joinery) is not simply a repair mechanism for broken pottery. It teaches us that something beautiful can arise from a damaged object. Instead of being hidden or disguised, cracks and missing sections are made more obvious and beautiful. The repaired object may be revitalized and valued more than the original one. The art of kintsugi is sometimes used as an encouraging metaphor for life.

In traditional kintsugi, the cracks in the broken object are filled with lacquer and gold. In modern versions of the art, they may be filled with a mixture containing copper and brass. The process of repair can sometimes be time-consuming but is often considered very worthwhile.

“Kintsugi” is available on the writer’s website (patricklane.ca) under the “New Poems” link. It’s the third of the four poems shared by the poet. I don’t know how long the website will exist now that he has died. You may be able to find the poems via the Wayback Machine if the site disappears. The Wayback Machine is intended to be a digital archive of all items published on the Internet.

I’m a poet, though of nowhere near the calibre of Patrick Lane. My description below is based on my own interpretation of the poem’s meaning. One line of thought says that a reader creates another layer of meaning for a piece of creative writing when they  interpret it in a way that makes sense or has value to them.

“Kintsugi” is a powerful poem. It describes a man who is damaged and feels close to death. It begins with the description of a lone raccoon at night breaking a reflection of the moon as it washes its food. The “slender fingers” of the animal create a skeletal image and the “broken moon” one of destruction.

The second line of the poem talks of a frog “hanging from its life” as one of its legs is held by a predator. Death seems close for both the frog and the man, who bears the scars of life both inside and outside his body and whose bones shine through his skin. The man cries and says he is “distracted by the task at hand,” or the act of dying.

Half way through the poem, the man hugs his sleeping loved one and finds peace. He then appears to be calmer about his approaching death, though he says that “there is only a little time left to know.” Despite the sadness of the poem and its multiple symbols and ideas related to death, it ends on a hopeful note. The final line, which is shown below, suggests a renewal of some kind.

On the face of a golden puddle the moon repairs itself again and yet, again. (Patrick Lane, last line of Kintsugi)

Underneath the poem, Lane defines the term kintsugi. He also says that repairing a broken bowl is only one of the technique’s “many possible beauties”, perhaps in reference to the fate of the character in his poem.

I intend to explore much more of Patrick Lane’s work, especially his poetry. I think he’s an interesting writer that deserves attention. I wish he had lived longer.

4 thoughts on “Poet Patrick Lane and Kintsugi: Repairing the Scarred and Broken”