Purple coneflowers are beautiful plants that are often seen in landscaped areas where I live. The wild plants are native to the eastern part of the United States. The cultivated ones are popular in the US, Canada, and other parts of the world. The flowers are large and showy. The central “cone” that gives them their name is often impressive.

The plant’s scientific name is Echinacea purpurea. It’s traditionally thought to have medicinal benefits, though scientists haven’t yet proved that this is the case. The cultivated plant is available in different varieties, includes ones that have white flowers. 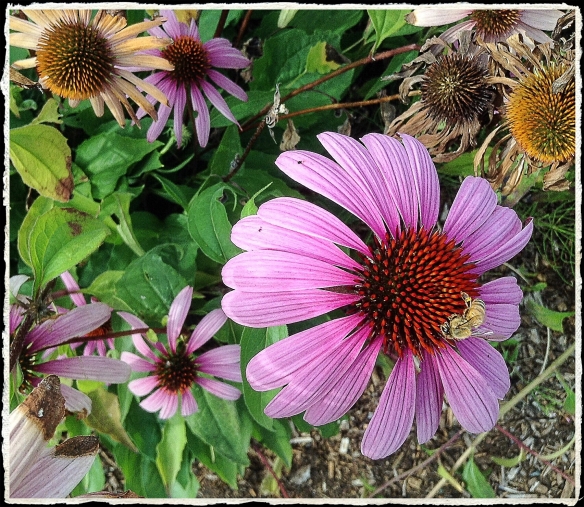 A purple coneflower and a bee

Where I live, purple coneflowers are often grown in large numbers beside black-eyed Susans. The combination of pink or purple flowers and bright yellow ones is a lovely sight. Purple coneflowers generally bloom for a long time. They can often be seen throughout the summer and even in early fall in the Greater Vancouver area.

Purple coneflowers and black-eyes Susans belong to the family Asteraceae, which means that they have a composite flower. The flower is technically known as an inflorescence. The centre contains disk flowers, properly called disk florets. The outer flowers that look like petals are actually ray flowers or ray florets. The “petals” often point downwards, making the central cone more obvious.

The flowers are pollinated by insects, including butterflies and bees. The small tortoiseshell butterfly (Aglais urticae) is a Eurasian species that doesn’t occur in British Columbia, but I thought the photo shown below was too good to ignore.

A small tortoiseshell butterfly on a purple coneflower in Moscow; photo by Bff, CC BY-SA 3.0 license

The genus name of the plant (Echinacea) is derived from the Greek word echinos, which means hedgehog. The word likely applies to the central cone of the flower. The disk flowers are arranged on a raised cone and do look spiny. The species name (purpurea) refers to the purple colour of the ray flowers, though they sometimes look more pink than purple.

The plant is a herbaceous perennial. Its leaves are long and narrow. They often have a toothed margin and a pointed tip. They are arranged in an alternate pattern on the stem. A group of purple coneflowers sometimes has a slightly untidy appearance, but it’s always an interesting and cheerful sight. The Italian Garden in Hastings Park in Vancouver has a lovely display of the plants every year.

Echinacea purpurea in the Italian Garden in Vancouver

Echinacea purpurea supplements are popular, especially for boosting the immune system and treating colds. Scientific confirmation that they have a medicinal benefit is lacking, however. One reason for this might be the variability in the nature of the supplements. Some are made from the flowers of the plant, some from the leaves, and some from the roots. In some cases, extracts of additional species of Echinacea are present. The extraction process, the concentration of the chemicals, and the purity and quality of the supplements vary as well.

So far, scientists have found no to a very minor health benefit of Echinacea with respect to colds. The plant may have more to offer us medicinally, but at the moment scientists don’t know whether this is the case.

It should be noted that some people are allergic to members of the Asteraceae family (also known as the Compositae or the daisy family). Echinacea could be dangerous for these people. The supplement can cause nausea and stomach upset in anyone.

The dose and duration of supplementation are important considerations for everyone. Hopefully scientists will soon learn more about the plant and its effects on humans so that we can get a clearer picture of Echinacea’s possible benefits or harm. Until then—and very likely afterwards—we can at least enjoy the beauty of a collection of purple coneflowers in summer.

2 thoughts on “Purple Coneflowers or Echinacea purpurea in British Columbia”