Amanita phalloides or the death cap mushroom is said to be the deadliest mushroom in the world. Unfortunately, it’s spreading in British Columbia. Ingestion of the mushroom initially causes gastrointestinal symptoms, which last for around twenty-four hours. The patient may then start to feel better. This stage is known as a false recovery phase, however. The fungal toxins harm the liver and kidneys, which may lead to death. It’s very important to avoid eating the mushroom.

The photos and fungus description in this post are included for general interest only. They are not meant to help anyone identify mushrooms. A particular mushroom may have a different appearance from other members of its species, change its appearance as it ages, or have features that make it easily confused with another species. The death cap can be confused with edible species. Mushrooms must be identified by an expert. 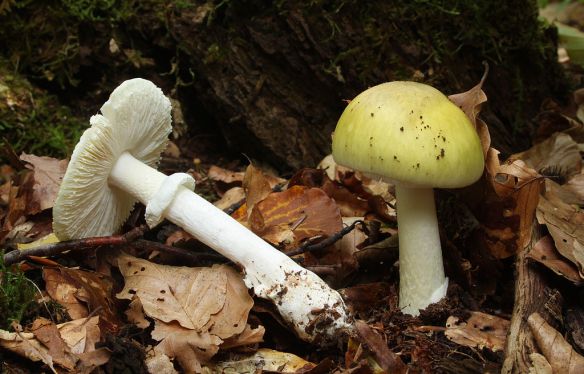 Mushrooms are the reproductive structures of certain fungi. The vegetative part of a fungus consists of branching, thread-like structures known as hyphae. The hyphae extend through the substrate of the fungus, forming a mass called a mycelium. They secrete digestive enzymes into the substrate. These digest suitable food into nutrients, which the hyphae absorb. Fungi aren’t plants and can’t make their own food in their bodies as plants do, so they must obtain chemicals from their environment in order survive.

The death cap is classified as an ectomycorrhizal fungus. An ectomycorrhiza in an association between the roots of a plant and the hyphae of a fungus. Hyphae of soil fungi enter the roots and surround its cells. The relationship is beneficial for both organisms. The fungus is able to absorb food that the plant has made and the plant absorbs water and minerals that the hyphae have obtained from the soil.

Amanita phalloides is native to Europe and not to British Columbia. It’s believed to have arrived in the province in the roots of imported plants. It associates with oak, hazel, beech, hornbeam, sweet chestnut, and other trees. It may now be spreading via the planting of trees from plant nurseries in landscaped areas, parks, and gardens.

At the moment, the fungus is found mainly in or near to urban areas. Investigators fear that it could soon spread to forests. In Victoria (British Columbia’s capital), the fungus has become associated with some native Garry oak trees. 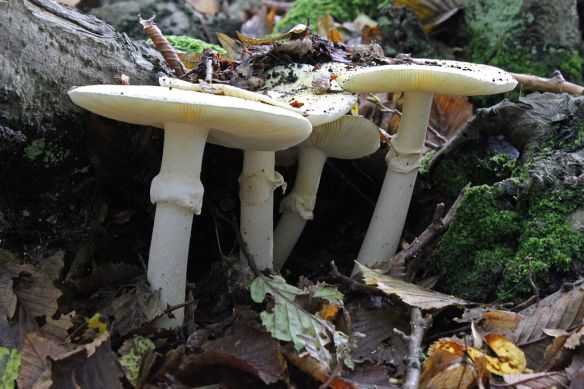 The mushroom is first visible as a small whitish ball emerging from the ground. The ball is known as the button stage. It’s covered by a thin layer of tissue called the universal veil. People may mistake this stage for puffballs, some of which are edible. Cutting the button stage open should reveal the immature parts of the mushroom and show that it’s not a puffball. When the mushroom is slightly older, it may be mistaken for straw mushrooms or paddy straw mushrooms, which are popular in Asian cuisine.

As the stem breaks through the outer covering of the button and elongates, a sac called the volva is left around the base of the stem. When the cap expands, the covering over the mushroom’s gills breaks, leaving a ring of tissue around the stem called the annulus. The cap has a range of colours. It may be white, pale yellow, dark yellow, brown, or even green.

In southwestern British Columbia, the mushroom is generally seen from June to November. This doesn’t mean that a mushroom seen in other months couldn’t be a death cap. Nature has exceptions as well as rules.

Stages in the life of the mushroom; photo by Justin Pierce, CC BY-SA 3.0 license

Anyone who suspects that they have eaten a poisonous mushroom should visit a doctor for a diagnosis, treatment, information, and prognosis. The information below is intended for general interest.

The main toxins in death cap mushrooms are known as amatoxins. Alpha-amantin or α-amantin is the most dangerous type. It inhibits protein synthesis, which is a vital activity in our cells, and can cause serious liver and kidney damage. Someone who has been poisoned by the chemicals may require a liver transplant in order to survive. Amatoxins can’t be destroyed by cooking, drying, or freezing the mushroom.

According to the BC Medical Journal, the first gastrointestinal symptoms from the poisoning begin around six hours after mushroom ingestion. Twenty-four to seventy-two hours after ingestion, the patient experiences a false recovery phase. Although gastrointestinal problems weaken, the mushroom toxins continue to harm the body. The last stage is called the hepatorenal phase. This phase involves organ damage and may be very serious.

Medical procedures that may help a patient exist, enabling some people to recover from the poisoning. Though there is officially no antidote for the harmful chemicals, n-acetylcysteine and silibinin at a suitable concentration and administered in the correct form are said to have been helpful in some cases. Silibinin is obtained from the milk thistle plant. It’s important that anyone who may have eaten a death cap mushroom begins medical treatment quickly.

California is also experiencing a surge in Amanita phalloides mushrooms. The mushroom attracts dogs as well as people in the state. It’s just as deadly for our canine friends as it is for us. The fungus is spreading in other parts of the Pacific Northwest region of North America as well.

Some people enjoy foraging for their own food. The activity can sometimes be a risky business, especially when mushrooms are involved. Children should be taught that they must never pick a mushroom to eat. Other people should be extremely cautious if they decide to pick mushrooms. It’s a potentially dangerous activity.