The Waterfront Station in downtown Vancouver is a historic landmark as well as a transit hub. It’s an impressive building that was once one of Canada’s famous and sometimes opulent railway hotels. The hotels were built by the Canadian Pacific and Canadian National Railways as a place for their passengers to stay.

The station is not the only attraction in the area today. The Angel of Victory statue located in front of the Waterfront Station is a moving reminder of lives lost in the First and Second World War. Other attractions are located in close vicinity to the station. 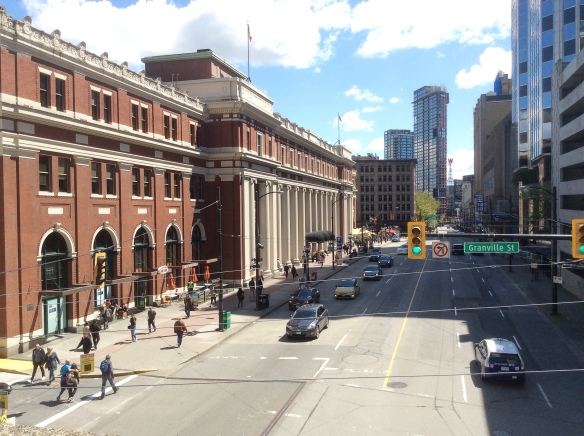 Waterfront Station as seen from a pedestrian bridge over the road

The station is located in front of Burrard Inlet, which is always an interesting place to view. Railway tracks are located between the station and the water, as can be seen in the photo from the City of Vancouver archives below. The building housing the station was created by the Canadian Pacific Railway (CPR) for people who had arrived in the city in the company’s trains and could afford the cost of staying in the hotel. A station platform was once located behind the hotel for the convenience of visitors.

The hotel was designed to be impressive for visitors and an important landmark in the burgeoning city. The red brick building with its neoclassical white columns and its ornamentation was and still is greatly admired. It was opened on August 1st, 1914. World War 1 started on July 28th of that year.

Today the Canadian Pacific Railway ships goods instead of transporting passengers. People can still travel to and from Vancouver in a train by using Via Rail. This company has a station close to the downtown area. The station is located next to a SkyTrain station, allowing travellers to quickly reach the downtown core. SkyTrain is Greater Vancouver’s LRT (light rapid transit) system. 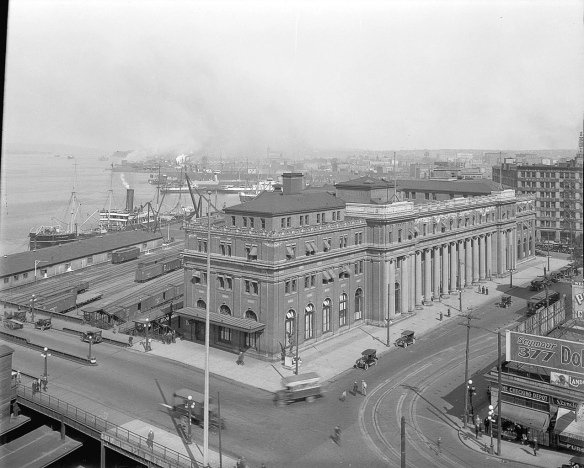 The station and steamships in 1923; public domain photo from the Vancouver Archives

Inside the Waterfront Station

Waterfront Station is a busy area. Different SkyTrain lines, a train for commuters known as the West Coast Express, and the SeaBus that transports foot passengers over Burrard Inlet are available for travellers. A helicopter pad is located very near to the station and connects to it via a short walkway. Buses stop outside the station.

The station contains stores and restaurants on the lowest floor as well as ticket machines. The interior of the public area is spacious and has a high ceiling, as shown in the photo below. It was once the waiting hall for people with tickets for CPR trains. The area looks as though it has been painted and decorated quite recently, but some paintings on a wall are older. They show landscapes that travellers on a CPR train may have seen in an earlier time. They were painted by Adelaide Langford in 1916. She was the wife of a CPR executive.

The upper floors of the station contain business offices and storage rooms. The area is said to be haunted by more than one ghost. This could be an interesting idea to explore, depending on one’s point of views about the reality of spectres. 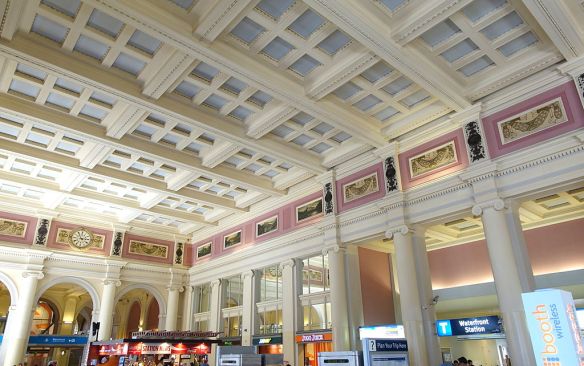 Part of the interior of the station; public domain photo by Daderot

Attractions to the West of the Station

Waterfront Station is a convenient dropping-off point for people planning to explore the attractions of the waterfront, the city’s downtown section, or a section of the city known as Gastown. Walking to the right as a person leaves the front of  the station will take the traveller to the pier at Canada Place, the Digital Orca sculpture, the Olympic Cauldron, five giant sails, and an attractive waterfront walking and cycling path. (The links go to previous posts that I’ve written.) The walking path travels beside the inlet as well as a float plane terminus, marinas, and other sights worth seeing.

If the traveller goes far enough along the walking path they’ll reach Stanley Park, which is a lovely place to explore. The journey takes around forty minutes, though it could take considerably shorter or longer depending on walking speed. The seaside trail continues through and beyond the park. Travelling the whole length of the 28 km trail is a worthy and enjoyable goal for someone in good physical shape and with time to spare, but exploring specific sections is fun, too. The official name of the trail is the Seaside Greenway.

Since the greenway loops around the perimeter of Stanley Park, which is located on a peninsula, it’s possible to take shortcuts back to the start in some areas. Some planning is needed if anyone is doing more than a casual walk or bike ride. Bikes are allowed on SkyTrain under certain conditions and the buses have bike racks. 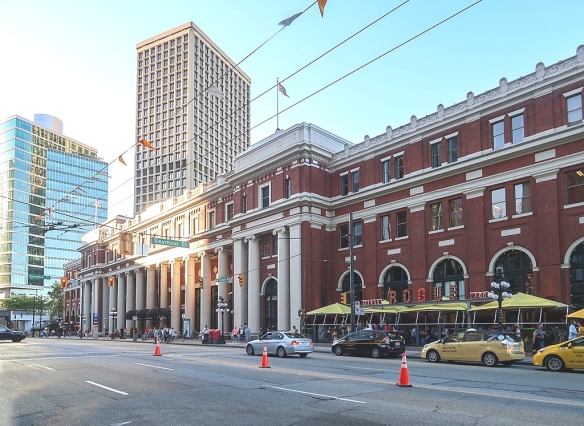 The station as seen from another perspective; photo by Wpcpey, CC BY-SA 4.0 license

Attractions to the South and East

Travelling a short distance to the south of the station (that is, straight ahead from its front entrance) will take a person to the downtown core of the city and its attractions. It’s easy to identify directions in Vancouver as long as the North Shore Mountains are visible on the far side of the inlet.

Travelling to the left of the entrance will take a person to a historic area of the city known as Gastown. The area has cobbled streets, interesting vintage lampposts, a steam clock, and a statue of Gassy Jack, or John Leighton. He was called “gassy” due to his talkative nature.

Leighton created a tavern beside Burrard Inlet in 1867. The tavern attracted loggers, fishermen, and other people who frequented or visited the area. The community grew as buildings were erected near the tavern. Eventually the area became the city of Vancouver. Today Gastown is known for its eateries, stores, and art galleries in addition to its architecture and street attractions. Special events sometimes take place in its streets. 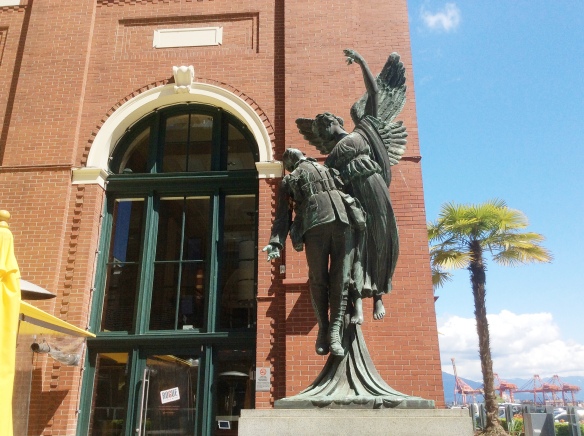 The Angel of Victory

The Angel of Victory Statue

The Angel of Victory Statue is located in front of the extreme east end of the station, as shown in the photo above. The statue is positioned approximately where Gastown begins. It depicts an angel carrying a dead soldier to heaven. At one time she was holding a small wreath in her raised hand, but at some point the wreath was broken. Now the angel holds just a few leaves in her hand.

The statue was created by Coeur de Lion MacCarthy (1881-1979) and was installed in 1921. His father was Hamilton Plantagenet MacCarthy. Interesting names seemed to have run in the family. Coeur de Lion was born in London in the UK but spent most of his life in Toronto. He created many war memorials.

The statue is made in bronze and is one of an originally identical trio. The other two angels are located in Winnipeg and Montreal. All of the statues honour CPR employees who were killed in the wars. The writing on the Vancouver plaque was added after the second world war. 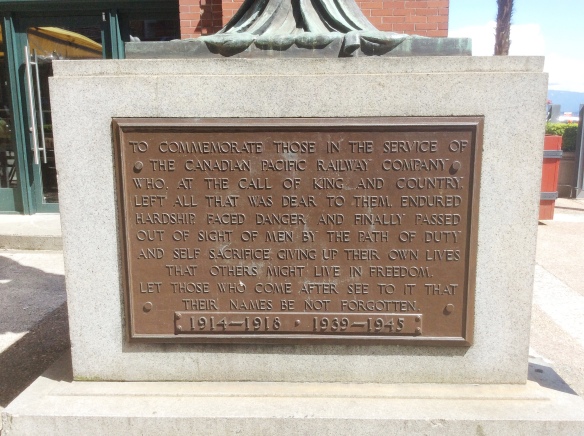 The plaque at the base of the statue

Waterfront Station is a great place to start a tour and a good place to aim for if a visitor arrives in downtown Vancouver at another location. There are multiple SkyTrain stations, bus stops, taxi stops, and car parkades downtown, so there are many different ways to reach the city centre.  A camera is an excellent accessory for a visitor or explorer in Vancouver at any time of the year.