I think that wolverines are intriguing animals that are worth studying. They are the largest member of the weasel family, but they’re so big and have such long and thick fur that they look more liked a small bear than a weasel. Though the animals have a wide range in British Columbia, they aren’t common anywhere. This assumption may be wrong due to our lack of knowledge, however.

Wolverines are reclusive creatures that are rarely seen and aren’t widely studied. They live deep in the forest at high elevations that are often covered with snow. The animal is listed as a “species of concern” in the province. 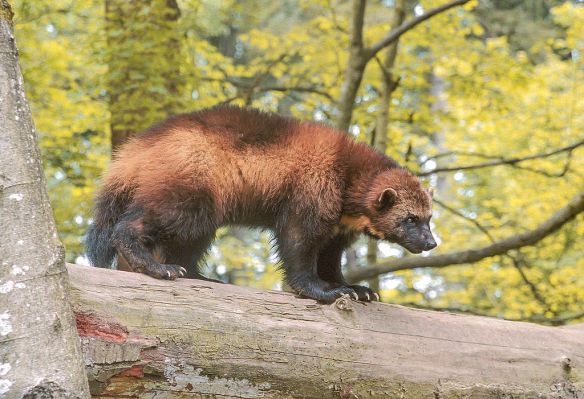 The scientific name of the wolverine is Gulo gulo. “Gulo” means glutton in Latin. The name was likely given to the animal because of its habit of devouring much of its food source, including the bones.

Physical Features of a Wolverine

Wolverines are generally about as big as a medium-sized dog. They are stocky and muscular animals with a wide head, a pointed muzzle, small eyes, and small and rounded ears. Their legs are short and their claws are semi-retractable. Unlike a dog, wolverines are plantigrade, which means they walk with the sole of their foot on the ground.

A wolverine’s fur is mainly dark brown. Two lighter strips start at the nape of the neck and travel along each side of the body. The stripes are often light brown but are occasionally cream. White or orange patches may be present on the chest and/or throat. The animal’s coat is oily and hydrophobic (water repellant). These properties are useful in a frosty or snowy environment.

The wolverines in British Columbia are primarily scavengers, though they sometimes hunt animals as large as caribou. The animals have a reputation for being ferocious, but researchers say that this is not always deserved. Wolverines are social when with their companions and are timid when humans are around. They have an excellent sense of smell and hearing, but their eyesight is not as good. The animals can smell the bodies of dead animals under the snow.

Wolverines travel long distances every day in order to find food. I’ve read claims that they journey anywhere from fifteen to twenty-five miles in a single day. They climb trees with ease and swim when necessary. The pads on their feet act like snowshoes, enabling the animals to travel well over snow. Their long and curved claws enable them to grab hold of icy surfaces.

Wolverines depend on snow in important ways. The animals don’t hibernate. The female builds a den in the snow in which to produce her kits, or young. The animals also preserve food by freezing it. Eating frozen food is no problem for them. Their strong jaws and sharp teeth enable them to easily chew the solid food.

Distribution of the wolverine according to IUCN (International Union for Conservation of Nature) data; public domain image

The animals are sometimes said to be nocturnal. It would be more appropriate to call them cathemeral, as can be seen from the daytime photos of the animal. A cathemeral animal is active at any time during the day and night. It often alternates short periods of sleep with short periods of activity.

Wolverines are solitary in the sense that they don’t gather in large groups to hunt. They are less solitary than was once thought, however. Once the kits are born, the youngsters stay with their mother for as long as a year. In addition, researchers have discovered that in at least some cases the father periodically returns to the group.

A wolverine in a zoo; photo by Birgit Fostervold, CC BY 2.0 license

Wolverines mate in summer, but the resulting embryo doesn’t implant in the lining of the uterus until early winter. This interesting phenomenon is known as delayed implantation. After a gestation period of thirty to fifty days, two or three kits are born in February or March. The fur of the newborns is white.

The lifespan of the animals seems to be highly variable. They are said to have lived up to seventeen years in captivity. In the wild, they may not survive beyond eight years.

A group of BC scientists has recently expressed renewed interest in wolverines. They are planning to set up bait areas and camera traps so that they can study and photograph the animals without permanently harming them.

Researchers in other areas have enticed the animals into cages with bait. Their aim is for the animal to leave some of its hair on the wire of the cage wall as it tries to escape. The animal is eventually released. The hairs and any attached cells are then examined in order to analyze any DNA that’s found. The process is obviously stressful for the animal, but it provides information without killing the wolverine. It’s possible that stress or injury in the cage may harm the wolverine, though. I don’t know whether the “bait areas” set up by British Columbian scientists will use the same strategy.

Camera traps are areas where a camera is automatically triggered to take a photo when an animal moves in front of it. Various detection methods are used to trigger the camera. A researcher periodically visits the area to see what photos have been taken. They put the camera setup in places where the animals that they are studying are likely to visit. Studying wolverines in this way can sometimes be difficult, however, because their population has a low density and the animals have a large home range. These factors make it hard for researchers to find them.

BC scientists are interested in determining how the creation of transportation networks for humans is affecting the animals. They are also concerned about the influence of  climate change on wolverines. The animals are physically and behaviourally adapted for life in a snowy environment in multiple ways. A decrease or loss of snow may have major effects on their lives.

Wolverine Watch is a research group that is asking the public to report evidence of the animal’s presence in the province. Two goals of the group are to conserve the area where the wolverines live as well as the animals themselves. The group is asking people not to follow or disturb the animals if they are discovered but to notice and record what they are doing and in what direction they are travelling.

The latest information that has been gathered suggests that the total number of animals in the southwestern part of the province is good, but the groups are widely separated and vulnerable. Hopefully all of the research that is being done will reveal enough details for us to significantly increase our knowledge of wolverines in British Columbia, assess any problems that they may face, and create solutions for these problems.