We recently got the first snow of the winter where I live. I hate driving in snow, but I love walking in it (as long as the ground isn’t icy) and I love photographing it. A delicate collection of fresh snow on plants is a lovely sight.

When I walked to a local food store to buy a few items in the late morning, the snow was more like hail and wasn’t settling very much. When I left the store five or at the most ten minutes later, the hail had turned to real snow and the road that had been black when I entered the store was now white. 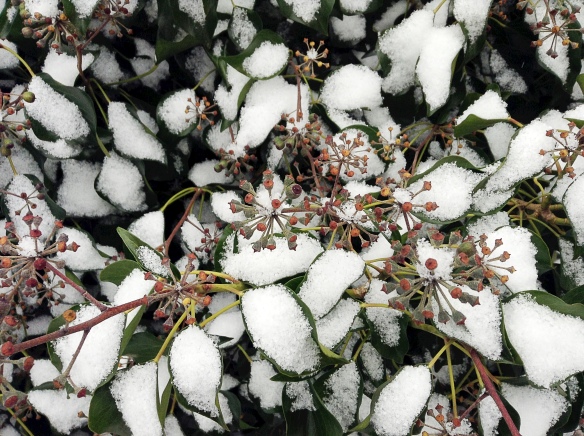 Mature English ivy near my home

Of course, I had to walk along the urban trail to see what I could photograph. Where I live, an “urban trail” is a wide tarmac or gravel path with natural, semi-natural, or cultivated borders. It enables pedestrians and cyclists to travel safely and pleasantly through urban and suburban areas. The trails pass by or near popular areas such as parks, schools, shopping centres, and medical offices. There’s a photo of one section at the end of this post.

The trail travels near my home and passes through some areas with trees and other plants that existed before the path was created. These areas are always interesting to photograph. They provide a chance for nature study as well as a useful route to a desired destination. 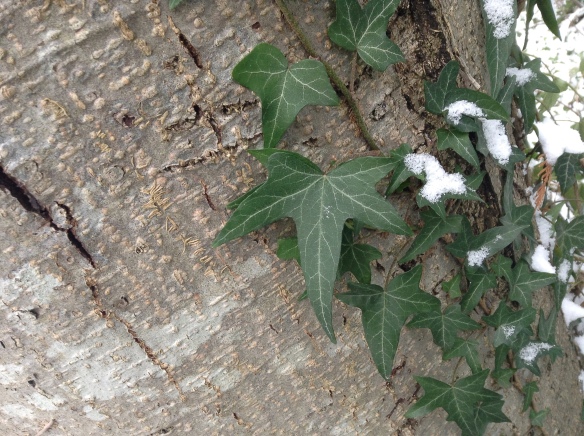 Juvenile English ivy beside the trail

The first plant that I photographed after I left the store was the mature English ivy (Hedera helix) shown in the initial photo in this post. It looks quite different from the juvenile stage, which is shown above. The juvenile leaves are lobed and have the ability to climb. The mature and reproductive stage has oval leaves and doesn’t climb. The first plant still has the clusters of stalks that bore the purple berries.

Some people find ivy and its ability to spread horizontally and vertically a nuisance, which I understand, whiles others love these abilities and think the plant is attractive. It’s certainly an interesting plant.

Western sword fern in the snow

The western sword fern (Polystichum munitum) is a common and very noticeable sight in my part of the world. The fern is evergreen and can therefore be appreciated all year long. It grows in the wild and in a cultivated form. The fronds grow in clumps and lean outwards from a central point. Each bears leaflets, or pinnae. Unlike the case in many ferns, the pinnae don’t divide into small ones.

Each pinna has a lobe pointing forward at its base, as can be seen on the frond on the left in the photo below. The frond also shows rows of brown dots on its undersurface. These are called sori. Each sorus (the singular form of the word) contains spore cases that release reproductive spores. The sori of the sword fern are green at first and turn brown later. 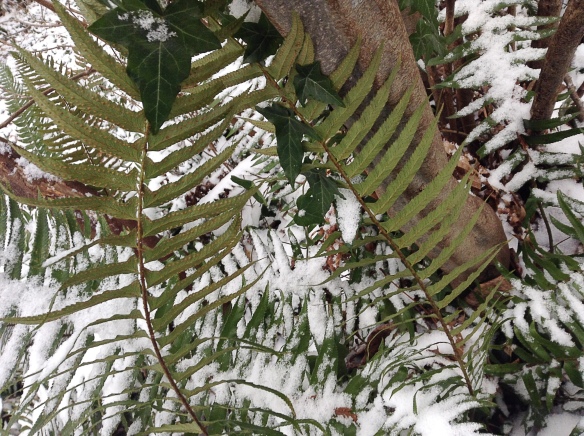 English holly (Ilex aquifolium)  is an attractive and introduced plant that is sometimes considered to be invasive in my part of the world. I actually photographed the plant below as I was going to the store along the trail. You may be able to see a few pieces of hail on the conifer leaves on the bottom left of the photo.

I always enjoy seeing a holly bush with its lovely red berries, especially around Christmas time. The plant does seem to be spreading in my area, though. I hope it doesn’t become a problem.

I often travel along the urban trail where I took the photographs shown above. Its borders vary considerably. In some places they are carefully cultivated, as shown in the photo below. In others they are wilder and left to their own devices, unless they interfere with the trail itself or with the water flow in the creek that travels beside one section of the trail. I took the photo of the sword fern in one of these wilder areas.

A section of the trail on the day after the snow

As can be seen in the photo above, the snow generally doesn’t last for long where I live. We may get a little more this weekend. As usual, though, the weather forecast may not be accurate. If the snow does appear, I plan to take more photos along a different section of the trail and at a higher elevation.