Nanaimo bars are delicious treats that are said to have originated in the city of Nanaimo in British Columbia. They are triple-layer bars that are sweet, creamy, and— most importantly from my point of view—covered with chocolate. It’s easy for me to eat too many of them, so I don’t buy them very often. When I do put one in my mouth, I always savour the moment.

Traditionally, the bottom layer of the bars contains graham wafer crumbs, butter,  coconut, chopped almonds, cocoa, an egg, and sugar. The middle layer is a mixture of butter, custard powder, cream, and sugar. The bars are topped with butter mixed with melted chocolate. The bottom layer is cooked in a double boiler and then pressed into a pan and the other layers are spread on top. The bars must be chilled in order to become firm.

These Nanaimo bars didn’t exist for very long after I photographed them.

Origin of the Bars

The Nanaimo Museum has a copy of a 1953 cookbook containing the earliest confirmed recipe for Nanaimo bars. The book was written by Edith Adams. Hints that earlier forms of the dessert existed can be found in various places, though all of the ones that I’ve seen give a Canadian origin.

The city of Nanaimo’s webpage about the bars (referenced below) contains a traditional recipe as well as a link to a Nanaimo bar trail brochure and map. The brochure shows businesses selling different versions of Nanaimo bars and related products and the map shows where to find them.

A visitor to the city can find gluten-free bars and Nanaimo bar ice cream, truffles, and cheesecake. Non-traditional flavours of the bars can also be found, including peanut butter, lime, raspberry, cranberry, and espresso. The only unusual version that I’ve tried is a mint version. It was nice, but I prefer the original type.

The City of Nanaimo

Nanaimo is located on the southeast coast of Vancouver Island and is a harbour city.  It’s a gateway to exploration of the island because ferries from mainland British Columbia travel to Nanaimo. The city can also be reached by air.

Nanaimo has attractions of its own in addition to being a place where ferries land. One of these attractions is the Bastion, an 1853 wooden tower where a cannon is fired at noon in summer. The tower belongs to the Nanaimo Museum, which is another interesting place to visit. The Bastion can be reached by travelling along the Harbourfront Walkway. The path is an enjoyable place to walk and to watch or photograph the activity in the harbour. The city also contains the Buttertubs Marsh, a 40 hectare (or an approximately 100 acre) bird sanctuary. It’s an interesting place to explore for people who enjoy observing nature.

In addition to the attractions mentioned above and the stores, restaurants, and cafes that would be expected, Nanaimo has other sites that are worth visiting. Two of these are Newcastle and Protection Islands, which are located not far from the harbour and are served by hourly ferry trips. 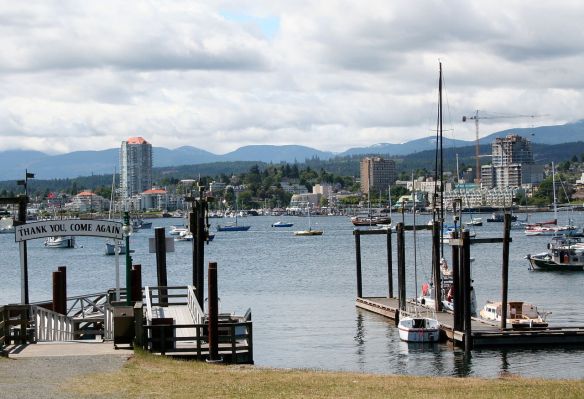 A short ferry ride takes visitors to the Newcastle Island Marine Provincial Park. Vehicles aren’t allowed on the island. The island trails offer beautiful views of nature as well as historical sites linked to the indigenous people of the area. The Snuneymuxw First Nation of the Coast Salish people were the original inhabitants of Newcastle Island, which is known as Saysutshun in their language. Campsites are available on the island for people who would like to stay longer than a day.

Protection Island also has trails that allow visitors to explore beaches, forest, and nature and can be accessed by a short ferry trip (for pedestrians, not cars). The island contains Canada’s only registered floating pub, which also serves food. It’s the only place to buy food on the island, though I have read that the people who live on the island sometimes sell the fruit that they’ve grown in summer. Some people live on Protection Island all year and travel to Nanaimo for work, school, or shopping via the ferry or in their own boat or kayak. The inhabitants travel around the small island by walking, cycling, or using golf carts.

The stretch of water between Vancouver Island and the mainland is known as the Strait of Georgia. Many islands are located in the strait and are collectively referred to as the Gulf Islands. Visitors to Nanaimo who are willing to take a twenty-minute ferry trip could explore Gabriola Island. It’s much larger than Newcastle and Protection Islands and has its own shopping centres, restaurants, elementary school, and accommodations for visitors. It also has attractive beaches and forests to explore and is known for its arts and cultural events.

Nanaimo can be a good base for exploring the southeastern part of Vancouver Island. It’s also suitable as a temporary stopping point during a journey to more distant parts of the island. I think the city and its surroundings are worth exploring in their own right, though. Sampling Nanaimo bars in the city of their likely historical origin can be an enjoyable part of a visit.