An organoid is a small representation of an organ or other body structure created from stem cells in lab equipment. Organoids are very useful in medicine because they often enable scientists to make discoveries that are more likely to apply to our bodies than research in animals or in isolated human cells. In January 2019, University of British Columbia researchers made a significant announcement with respect to organoid production. They have been able to grow “perfect” human blood vessels in a lab dish. 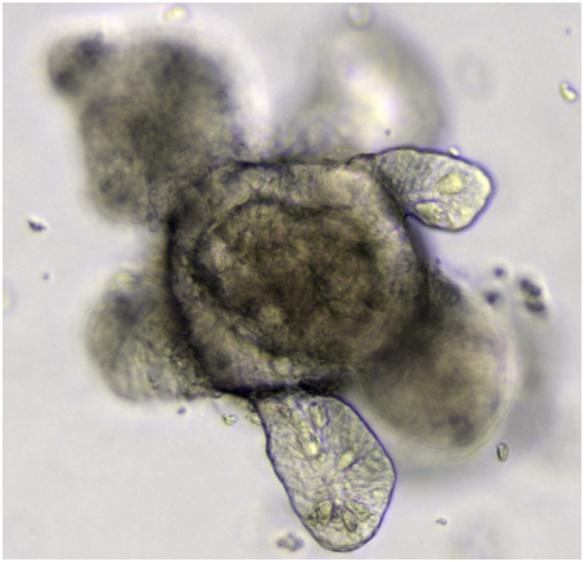 Photo of an intestinal organoid created from stem cells by Meritxell Huch, CC BY 4.0 license

An organoid isn’t an exact replica of a real organ or body structure, but it has some of its features. It has a three-dimensional structure consisting of multiple cells. In some organelles, the cells are identical to each other. In others, multiple cell types that are found in the real organ are present and are arranged correctly. (Stem cells and their products have a wonderful ability to self-organize.) Despite these facts, an organoid generally doesn’t look like the real structure. This doesn’t appear to be the case for the newly created blood vessels, however.

An organoid has limitations. The real structures in our body aren’t isolated but interact with other parts of the body. Organoids are still useful with respect to the study of human health problems, however. Blood vessels could be an especially valuable creation because our organs are affected and affect each other via substances transported by blood.

Organelles can help researchers learn more about our biology and about changes during illnesses. If they are made from cells from a specific person, researchers can explore how particular medicines might behave when they are administered to the person’s real organ. It might one day be possible to use the cells in organelles to treat illnesses.

Scientists are able to create organoids due to the special properties of stem cells. A stem cell is unspecialized but has the ability to make specialized ones by cell division. Stem cells which come from an embryo in the early stage of its development can make any cell type in the body. Adult or somatic stem cells are more limited and can make only certain types of specialized cells. Hematopoietic stem cells in red bone marrow can make the cell types found in blood, for example, but not other types.

Stem cells exist as different types that have slightly different abilities, as described below.

Totipotent stem cells can become any cell in the body as well as those of the placenta. Only the zygote and the cells produced in the very early stage of embryo development are totipotent.

Pluripotent stem cells can produce any type of cell in the body, but not placental ones. They are present in the inner cell mass of the blastocyst, a-stage of embryonic development that forms a little after the stage described above.

Multipotent stem cells can produce several types of specialized cells, but not every type of cell in the body. Hematopoietic stem cells are multipotent.

Unipotent stem cells can produce only one type of specialized cell.

Embryos used in stem cell research are donated. As one might expect, obtaining pluripotent stem cells from blastocysts is sometimes controversial because the process of extracting the cells destroys the embryos. Scientists have discovered how to trigger certain cells in our body to become pluripotent, however. These induced pluripotent stem cells (also known as iPSCs or iPS cells) are often produced from skin or blood cells, which are easily obtained from a donor. The cells are genetically reprogrammed to cause them to become pluripotent. They may offer many medical benefits. 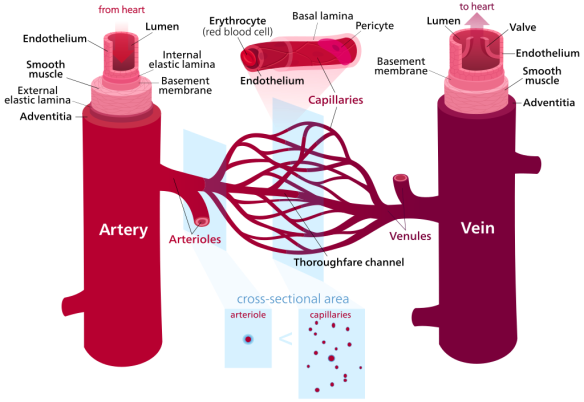 The scientific report written by the UBC researchers was published in the Nature journal. The senior author of the report was Josef Penninger. In their abstract, the researchers say that they used pluripotent stem cells to create their blood vessels. I can’t read the article itself because it must be purchased. The CBC (Canadian Broadcasting Corporation) article in the “References” section below says that the stem cells used in the experiment were obtained from adults, not embryos. Therefore the researchers must have used induced pluripotent stem cells. It took them three years to find the correct “recipe” for creating the vessels, which sounds about right when cells are undergoing complex genetic modifications.

Unlike many organoids, the blood vessels created by the UBC scientists reportedly looked like the real thing. They weren’t actually perfect, as headlines claim, but they were closer to perfection than any other blood vessels that have been created from stem cells. Very significantly, when they were implanted into mice they developed into functioning blood vessels, including arteries and capillaries. Some of the transplanted vessels worked for as long as six months.

Potential Uses of the Organelles

The scientists plan to use their blood vessels to study changes that occur in type 1 diabetes and hopefully to find ways to help patients. The scientists say that one change in the disorder is a major thickening of the basement membrane in the blood vessels. This interferes with the transfer of oxygen and nutrients to cells.

In lab equipment, the researchers exposed the organoid vessels to the type of environment that is found in someone with diabetes. They found that the lining of the vessels thickened. They discovered one substance that improved the condition of the vessels in lab equipment and in diabetic mice and that hasn’t yet been used as a medicine in humans. The researchers hope to discover effective and safe medicines for many illnesses and perhaps one day to create vessels that can be transplanted into humans. It will be interesting to hear about what else they discover from experiments with their organoid.