Raccoons are interesting animals to observe. They are often nocturnal, which is the case for the animals in my neighbourhood. In some areas they are also active during the day, however, as shown in the Stanley Park photo below. I took the photo by a seating area in front of a concession stand. Food remains left by park visitors are a great temptation for raccoons.

Raccoons are considered to be clever creatures and are great climbers. I enjoy watching their antics. Readers may remember the case of the raccoon who climbed a Minnesota skyscraper in 2018. She was live-trapped on the roof of the building and released into a safe area. Unfortunately, raccoons are sometimes considered to be pests in my part of the world.

A raccoon in Stanley Park

The scientific name of the raccoon is Procyon lotor. The Pacific northwest raccoon (my local form) is classified in a particular subspecies: Procyon lotor pacificus. It belongs to the family Procyonidae, which also includes coatis and kinkajous. The raccoon is the largest and bulkiest member of the family. Its name is sometimes spelled “racoon.” It’s native to North America but has been introduced to Europe and other parts of the world.

Raccoons have a distinctive appearance compared to other wildlife in my area. Its most noticeable features are the black mask over the eyes and face, the black rings on the tail, and the arched back. The hunched appearance is due to the fact that the hind legs are longer than the front one. The animal’s face is pointed. Its front paws are dexterous, enabling the raccoon to manipulate objects that it discovers. 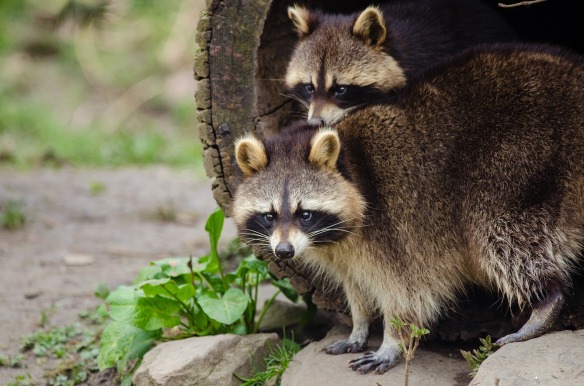 A photo of raccoons by skeeze, CC0 public domain license

Raccoons are omnivores and eat a wide variety of food, depending on what they can find. They are adaptable animals that are found in many habitats, including forest, marshland, and urban areas. Most animals are inactive during winter, although they don’t enter a true hibernation. In cities, the animals may be active all year.

Racoons are known for dipping their food into any water nearby as though they are washing it. The behaviour isn’t completely understood. Some scientists have suggested that wetting the object improves the animal’s sense of touch and allows it to the examine the food better.

The animals have both a capable brain and a capable body. Though they can’t run very fast, they manipulate items with their front paws, climb trees easily, and descend head first. They are good swimmers. They can also stand on their hind legs, although they don’t seem to do this very often. They may perform the behaviour as a warning sign when humans get too close.

Raccoons generally mate in late winter or early spring in my area. Male raccoons are sometimes known as boars, females as sows, and youngsters as kits. Gestation lasts for around sixty to sixty-five days. Generally two to five kits are born in the spring or a little later in the year. The kits nurse for around two months and stay with their mother for a while after they are weaned. They sometimes remain with her until the next breeding season.

Until a few years ago, I used to see raccoons travelling along my suburban road at night. Sometimes a family would climb on to the balcony of my home and play. Now I mostly see the animals during the day in Stanley Park.

The disappearance of the animals from my neighbourhood roughly corresponded with the time that the city issued garbage cans to residents for the weekly pick-up. Before this time we put out unprotected bags, which the local crows (and perhaps the raccoons) loved. I have heard of raccoons opening garbage cans and getting into them, but they don’t seem to have done this along my road. Containers with lids that raccoons can’t open are important.

Staying one step ahead of the animals and preventing them from finding food can be very helpful. It’s not unheard of for a raccoon to enter a home through a pet door in order to feed on cat or dog food. The door may need to be blocked to prevent this from happening. Farm birds should be housed in a secure enclosure so that raccoons can’t reach them. Any other food sources that are being raided should be removed or protected.

Raccoons use dens for both shelter and reproduction. Sites chosen for the dens include abandoned burrows created by other animals, hollow trees and logs, areas under rocks, barns, attics, chimneys, and crawl spaces under homes. Entrances to buildings used for human purposes should be blocked.

If an animal does become a problem, it would be good to find a pest controller that uses a humane method to remove it. Humane pest controllers that live-trap animals and move them far away and into the wild are available in many areas. It’s much better to prevent a problem than to solve one, however. A relocated raccoon may be successful in its new habitat, but it may not be. The animals have lived for as long as twenty years in captivity but may have a dramatically shorter lifespan in the wild. It would be nice to help them live as long as possible.

2 thoughts on “Raccoons in British Columbia: Clever and Interesting Animals”