I love hearing the honks of Canada geese as they fly overhead and looking up to see their V formation in the sky. The sound always reminds me of the Canadian wilderness. In reality, the birds are found in the United States and Northern Mexico as well as Canada and are seen in cities and towns and well as wild places. Canada geese can be found at any time of the year in the Vancouver area. 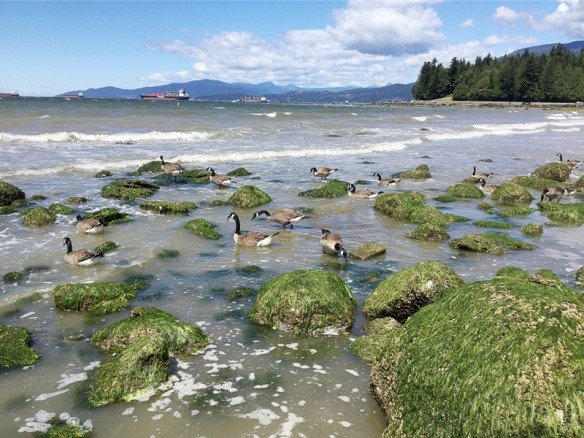 Canada geese that I photographed in Stanley Park in summer

The Canada goose (Branta canadensis) is an attractive bird. Its neck is long, thin, and black. Its head is black, too, except for the white patch on each side of its face. The two patches are joined by a white “chinstrap” under the head. The bird’s upper body is brown to grey. Its underside is usually paler and changes to white at the back of the body. Males and females look similar.

Most of the birds in the photo above are clearly Canada geese. It might surprise some people to know that it’s not always easy to identify the birds, at least in the Vancouver area, due to the presence of a similar bird. The cackling goose (Branta hutchinsii) was once classified as a subspecies of the Canada goose but is now considered to be a separate species. It resembles a Canada goose in appearance but is smaller and has a shorter and thicker neck, as shown in the photo below.

Unfortunately for people who want a definite identification of the bird that they are observing, the cackling goose hybridizes with the Canada Goose, producing birds with intermediate features. In addition, some subspecies of the Canada goose are smaller than others. Another confusing factor is that the apparent length of a Canada goose’s neck varies according to what it’s doing. These points can sometimes make identification of a bird difficult.

The Canada goose is found in water of different types, wetlands, and grain fields. Some birds frequent grass in urban areas. A flock of geese on an urban playing field can be an interesting sight but can also be annoying because of the droppings that are produced. The birds eat aquatic plants, grass, grain, and small animals.

The first two Canada Geese photos in this post show the birds at Stanley Park, a large and very popular area in Vancouver. The park is located by the ocean. As can be seen, the geese in Vancouver don’t seem to mind being in and near sea water at all. I took the photo of the gosling at John Hendry Park, which contains a small lake (Trout Lake) as well as grassy and treed areas. The goslings were very confident and came close to me as they fed on grass. Their parents were watching carefully, though.

Canada geese stay in flocks until the mating season. They mate for life. If one of the birds dies, however, the other one will likely choose a new mate.  The nest is a mound of vegetation and is constructed near water. The female incubates the eggs and the male protects her. The clutch generally consists of four to seven eggs. Incubation takes about a month.

Once the goslings are born, they stay with their parents for some time as they grow. They don’t leave to start independent lives until the next spring. The birds are said to have a lifespan of up to twenty-four years. 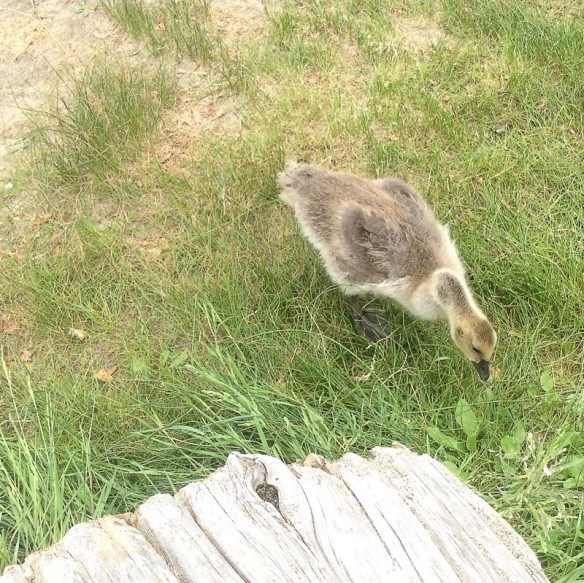 A gosling at John Hendry Park

The Canada Geese in my area are used to people and don’t seem to mind our presence as long as we stay at a respectful distance. They usually move away if humans get too close, however. Some birds are more confident than others or more confident in certain places.

I would have thought that a pair of geese with goslings would be especially cautious. They probably are in many places, but in certain spots in my part of the world this is a good time to observe the birds closely.

Lost Lagoon in Stanley Park is a popular spot for bird watchers and for people who like to feed birds (hopefully with healthy food). The Canada Geese that choose to appear here with their goslings seem quite content to have people approach them to take photographs. They continue to graze by the lagoon as the photos are taken, but even here a parent stops grazing occasionally and lifts a watchful eye.