The bridge over Eagle Creek

On New Year’s Eve, I published a post about my walk beside Eagle Creek to Squint Lake on a sunny December 31st. Today I describe the area on a snowy day. We don’t get much snow where I live. When it does fall, it usually appears after Christmas and doesn’t last long. In February, 2017, we got a nice deposit that created some picturesque scenes. I visited Eagle Creek and Squint Lake with my camera to take some photographs of the scenery before the snow melted. The creek drains into the lake and then continues on to the larger Burnaby Lake.

The Origin of Eagle Creek

Eagle Creek is created by water that drains off Burnaby Mountain. With an elevation of 370 metres, Burnaby Mountain is low compared to the nearby mountains on the other side of Burrard Inlet. It’s a great place to explore, though. It offers a forested conservation area with trails as well as a park with wonderful views of the inlet and its surroundings. Multiple creeks drain off the mountain and continue through the surrounding lowlands.

I travel beside Eagle Creek and to Squint Lake along an urban trail and a park trail. Urban trails are wide paths with a surface made of gravel or tarmac. They allow pedestrians and cyclists to safely travel around the city of Burnaby to places like schools, shopping centres, libraries, medical offices, and parks. They are also great places to get some exercise. For the most part, they have attractive and landscaped borders. They connect to the urban trail system in Vancouver. Burnaby adjoins the city of Vancouver.

Burnaby has places that are in their original forested or treed condition (except for the trails that have been created for people to travel through them), such as the Burnaby Mountain Conservation Area. It also has a great collection of parks. The latter sites are often more developed than the conservation area. They have areas of natural and sometimes landscaped ground as well as artificial trails and facilities for the public. Even areas such as these, which I classify as “semi-natural”, are enjoyable places to observe nature. 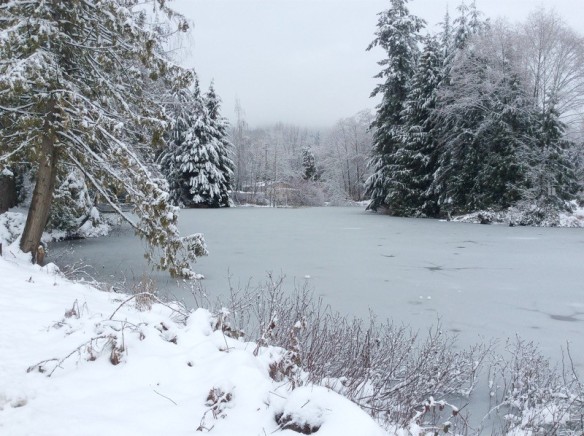 The frozen section of Squint Lake

Eagle Creek flows through various types of landscape on its journey to both Squint and Burnaby Lake, including culverted and channelized areas. In some places, it’s located by an urban trail. In others, it travels through parks. It sometimes travels through undeveloped ravines. Immediately after it leaves Squint Lake, it passes through a strip of natural habitat in the Burnaby Mountain Golf Course. The lake is also part of the golf course grounds but is open to the public. I plan to one day follow and photograph the creek’s interesting journey. 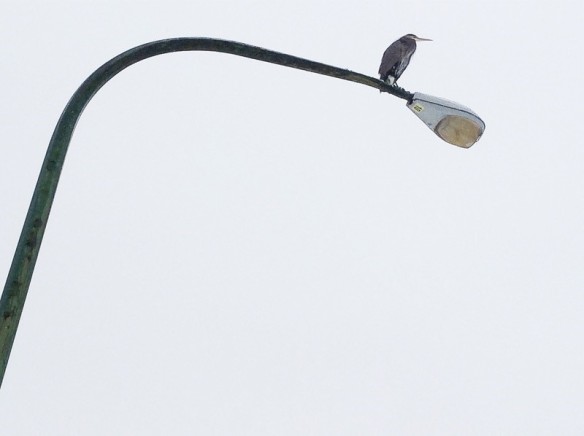 A Great Blue Heron by Eagle Creek After Snow

The great blue heron (Ardea herodias) is an impressive bird because of its size. I photographed the bird above from an urban trail beside Eagle Creek just after the snow had fallen. I quite often see a heron in Eagle Creek or in a nearby creek that drains into it, but this was the first and only time that I’ve seen the bird on a street lamp.

Despite its name, the bird is more grey than blue, though the plumage does have a slightly blue tint. It’s a wading bird with a long bill, a long thin neck when it’s extended, long legs, and a wide wingspan. It generally catches aquatic prey but will also eat land animals. The subspecies of the bird in the Vancouver and Burnaby area doesn’t migrate but stays here all year. 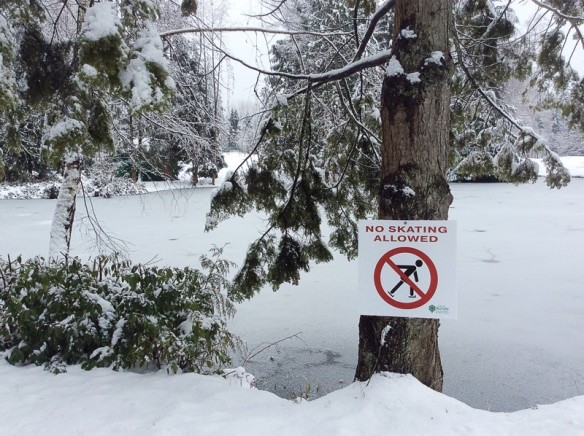 I always want to follow a bridge over water in order to see where it leads. The bridge in the first photo in this post leads to the main part of Squint Lake Park. The park contains pleasant trails through the remnants of a forest as well as a softball field, tennis courts, a small playground for children, and the golf course. One section contains a skunk cabbage patch that is beautiful in the spring. A sign by the bridge warns people that the creek is a route for salmon fry and implies that the water should be treated well. The fry are released into the creek at suitable times of year by a group known as the Eagle Creek Streamkeepers.

Despite the park’s name, it’s located to the north of Squint Lake. To reach the lake, a traveller needs to bypass the bridge and the main part of the park and keep walking on the trail beside the road to the golf course entrance. 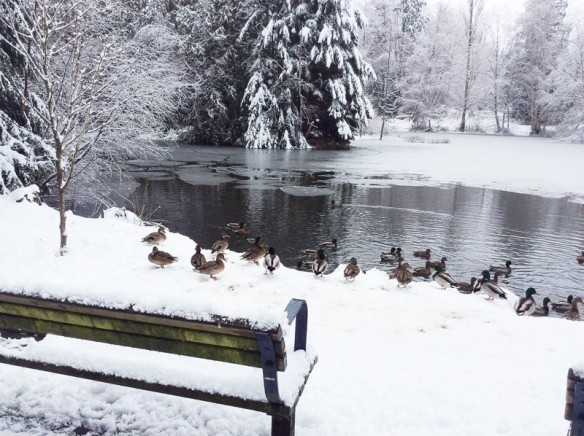 The bench where people often sit to admire or feed the ducks.

A coating of snow or ice often changes the landscape dramatically as well as beautifully. While I don’t like driving in snow, I enjoy walking in it. The partially frozen surface of Squint Lake and the snow-covered trees are a lovely sight.

Mallards are the most common birds seen in the lake and stay there all year. People often sit on the bench to feed them. The birds are confident as they come on land to get the food, though they do leave if someone gets too close to them.

Some of the golf course area is open to the non-golfing public, such as the lake, landscaped areas, and a place to buy coffee. The city of Burnaby offers a free WiFi service at public facilities, including the golf course. Visitors can’t go on to the grass unless they have paid to play golf.

So far the only snow in my area that I’ve noticed was a very light fall that didn’t settle and soon turned to rain. The situation is different at the top of Burnaby Mountain, which often gets snow in winter when the communities at its base don’t. It will be interesting to see what happens in the next couple of months. If it does snow, I hope to get more pictures of the creek and lake.